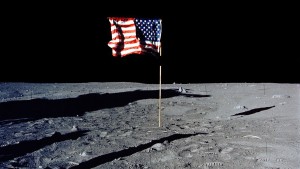 This week is the 50th anniversary of the Apollo 11 moon landing. So we’re taking a walk down memory lane, and looking at the current state of space exploration.

The modern age of space travel started with the Cold War in the 1950s. USA v Soviet Union. Democracy v Communism. Both wanted to be stronger, better, faster, stronger than the other. And the Soviet Union raised the stakes in 1957, when it launched the first man-made object – an artificial satellite – into orbit. The US said ‘oh it’s on.’

Who doesn’t love some friendly competition?

This competition was pretty chilly, if you know what we mean. In 1958, President Eisenhower signed the National Aeronautics and Space Act into law, which led to the official launch of NASA. And the race to the moon. The US got there first in 1969, when Neil Armstrong put on his moon boots and took that small step. You know the one.

Exactly. But space travel is expensive. In 2011, NASA retired its space shuttles (the ones used to take astronauts to space) because they cost so much to operate and were preventing the org from investing in other tech (think: a new crew exploration vehicle). Now, many astronauts that go into space catch a ride with Russia. We think it’s ironic too.

Working on tech that will allow astronauts to explore further into space. Including someday getting to Mars. Meanwhile, the US wants to shift the bulk of its responsibility of managing International Space Station operations to private companies. And is willing to give access to the space station (think: time aboard) to private-sector astronauts to generate money. Which brings us to the current space race between the companies working to send regular people to the stars.

We get into that, and the debate about colonizing Mars, in theSkimm app. Every week, the app goes deep on a different news topic to give you the context you need to understand what's going in the world. Download the app now, and you get the first week free.