Marijuana legalization: Why the legal weed trend is growing 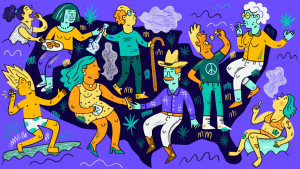 We’ll be blunt: this is a guide about marijuana. Specifically, its legalization in the US.

The feds are going to legalize weed?

Debatable. Weed is still illegal on the federal level. But in recent years, you might’ve noticed something in the air. It’s the smell of the country becoming more tolerant about marijuana legalization. Polls show that the majority of Americans support making weed legal. Since the ‘90s, 33 states plus DC have legalized medical marijuana in some form. Since 2012, 11 states plus DC have legalized weed for recreational purposes. Momentum seems to be picking up internationally too. Uruguay became the first country to legalize weed in 2013. Canada followed in 2018.

History suggests that as medical marijuana became increasingly mainstream, the stigma surrounding weed started to fade. One case study found that media coverage may have shaped public perception, with stories increasingly associating marijuana with medical purposes instead of crime. Then there’s the social justice angle.

The ‘80s and ‘90s-era crackdown on drug offenses has disproportionately affected minorities. For example, even though whites and blacks use weed about the same amount, a study found African Americans are nearly four times as likely to be arrested for possession. And lawmakers on both sides of the aisle increasingly see legalization as a way to address racial disparities in the criminal justice system.

So what’s on the table?

First, there’s a difference between legalizing weed and decriminalizing it. And there are also a lot of opinions on how exactly to do these things.

Legalization...typically means legalizing weed for recreational purposes. But there are still restrictions. Only people 21 and older can possess a small amount of pot. But they can’t necessarily use it in public. And some places (Vermont and DC) have legalized possession but not sales.

Lawmakers are considering a few bills.

At the same time, the issue has become a campaign trail talking point heading into 2020. Nearly all of the Democratic candidates support legalizing weed nationwide.

We get into that, concerns about the health effects of weed, and the debate about whether and how to legalize in theSkimm app. Every week, the app goes deep on a different news topic to give you the context you need to understand what's going on in the world. Download the app now and you get the first week free.