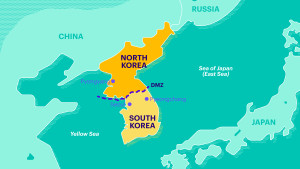 You’ve heard North Korea's history is effing crazy. This is your Skimm on how it got that way.

Once upon a time, there was only one Korea. Then in the early 1900s, Japan claimed it. Until the end of WWII when Japan (spoiler alert) surrendered to the Allied forces. The US and Russia – WWII allies – took it upon themselves to split the Korean peninsula between North and South along the 38th parallel, aka the 38° N latitude line that divides the two. The US took the South. Russia took the North. And it was all supposed to be temporary...

The North – backed by the Soviet Union and Communist China – wanted more influence in the region. So in 1950, they invaded South Korea. The US came to South Korea’s defense. And this turned into the years-long Korean War, which is considered the only real ‘hot’ part of the Cold War between the US and the Soviet Union. Millions of people died in the conflict. The two sides eventually shook on a ceasefire and created a new border that’s not too different from the 38th parallel. But they never signed a peace treaty. Fast forward to now, and the North and South are still technically at war.

So who are the Kims?

North Korea’s first family. They’ve been in control of North Korea since after WWII. It all started with Kim Il Sung, a Korean fighter who trained with the Soviet army. The Soviets tapped him to create a gov in the North. He ended up ruling for decades, adding ‘Supreme Leader’ to his resume. He’s responsible for NK’s isolationist vibe. He also reworked the country’s entire history around...himself. The country uses a calendar that started the year he was born, and school lessons focus on the family’s achievements. When he died in the ‘90s, his son Kim Jong Il took over. At the time, the country was suffering from famine and economic crisis. So, naturally, he spent most of the budget creating a nuclear program. This landed the country on the international community’s sh*t list.

When Kim Jong Il died in 2011, his son Kim Jong Un stepped in. Call him Lil’ Kim. You know him for his snazzy haircut. And for carrying on family traditions...like human rights abuses and aggressively building out the country’s missile arsenal and nuclear weapons.

Millions live in poverty, and basics like food are either in short supply or too expensive for many. The gov controls everything from where people live, to what they do for a living, to the haircuts they can get. There are reports that for some extra cash, the gov sends its citizens off as slaves to Russia and China and then pockets their wages. Most people don’t have access to the Internet, and if they do they’ll mostly find government propaganda. Everything from apparently watching a foreign movie to trying to flee the country are considered crimes. These can get people thrown into labor camps, where they’re often tortured and starved. The UN estimates that there are tens of thousands of people stuck in these kinds of prisons. Oh, and public executions are normal. This is based on first person accounts from people who’ve managed to escape and from info gathered from human rights orgs.

Ok...so tell me more about the country's weapons.

Missiles are like deadly carrier pigeons – they carry warheads to their targets. Warheads are the part of the missile that goes ‘boom.’ Warheads can be anything from simple explosives to nuclear bombs. Without a warhead, a missile is pretty useless. North Korea’s been focusing most of its efforts on nuclear warheads and ballistic missiles. They’re the kind that follow a predetermined arc to their target and are pulled back down by gravity. They come in short, medium, intermediate, and intercontinental ranges, based on how far they can go.

So what does North Korea have?

It’s hard to say for sure because the country’s weapons program is big and full of secrets. But we know that this year alone, the country has at least twice tested an intercontinental ballistic missile (ICBM) that could hit the US. NK also may have created a nuclear warhead small enough to fit in an ICBM. And earlier this year, NK said that it has tested out a hydrogen bomb aka the type of nuclear bomb that's more destructive than the ones dropped on Nagasaki and Hiroshima in WWII. The next hurdle for the country is to create a successful re-entry vehicle. Initially, experts thought all of this wouldn’t happen until at least 2020. Now, experts estimate that North Korea could put all the parts of weapons puzzle together by next year. Breathe in, breathe out.

Why are they doing all of this?

North Korea knows that most of the international community would really like them to press ‘pause’ on their missile testing. But the Kims think having a pile of nuclear weapons is the only way to protect their regime. They view Iraq’s Saddam Hussein and Libya’s Muammar Gaddafi as cautionary tales. Both of those countries gave up their weapons programs after negotiating with the international community. Both leaders also ended up being ousted in part because of US military intervention. And Kim Jong Un doesn’t want a repeat in North Korea.

Who are the major international players?

A lot of countries have a lot of feelings about North Korea and its weapons. Here’s who you need to keep track of.

USA: Not a fan. North Korea has threatened to use its nukes against the US. Many times. For decades, the US has been trying – and failing – to get the North to curb its weapons program with sanctions and rounds of talks with the North. In recent months, North Korea has significantly ramped up its missile testing and relations have reached a boiling point.

South Korea: It’s complicated. It shares a border with North Korea, so it’s especially not down with these nuclear ambitions. South Korea is a US ally, and still holds a grudge over the North starting the Korean War and trying to take over its half of the peninsula. The US has thousands of troops there and helped install an anti-missile defense system. But over the years, certain South Korean politicians have been open to talking things out with NK with the goal of kissing and making up.

Japan: There’s a lot of bad blood between Japan and North Korea, because of that time Japan ruled the Korean peninsula. And that other time North Korea abducted Japanese citizens. Plus, the North gives Japan side-eye for being a US ally. Meanwhile, many of NK’s test missiles end up landing in Japanese waters, making it a little too close for comfort.

United Nations: Same feelings as the US. It’s been giving North Korea side-eye for years by passing sanctions condemning the country’s actions. The North usually presses ‘ignore’ on these.

Russia: As the Soviet Union, it was the North’s main cheerleader. Now, the countries are still trading partners, and Russia has been accused of helping NK build some of its military might. It also still generally takes the North’s side because it sees it as a chance to push back against the US’s western influence, and to boost its own reputation as a negotiating power within the international community. But...Russia also doesn’t want nuclear war and has signed on to UN sanctions against the North.

China: NK’s closest ally and biggest trading partner. Meaning that any economic sanctions against NK also hurt China. China is a permanent member of the UN Security Council, and every permanent member holds veto power. This is handy when it comes to things like voting on sanctions. In the past, China’s been able to protect its friend by threatening to use their veto. Still, China very much does not want a war at its borders, and sometimes votes in favor of sanctions on North Korea for its nuclear program.

What has the US done about the NK threat?

President Clinton: Came the closest to setting up a lasting deal. He got the US and NK to sign the "Agreed Framework" – as in the US would drop sanctions and send over some extra oil and cash in exchange for NK cooling it with its nuclear production. It eventually failed because North Korea said ‘eff it, let’s just keep building weapons.’ And because Congress was never fully on board with the plan.

President Bush: First, there was that time he labeled North Korea part of the “axis of evil” in his first official State of the Union. That really got things off on the right foot. Then he took a seat at the table for the “Six-Party Talks” (think: NK, SK, China, Japan, Russia, and the US). They solved…just about nothing. And NK went ahead and conducted its first nuclear missile test.

President Obama: His MO was “strategic patience.” It didn't work. In 2014, “The Interview” was set to come out – a movie about two journalists who landed an interview with Kim Jong Un, but were recruited by the CIA to assassinate him instead. Because somehow Seth Rogen and James Franco are part of all this. NK was piiiiissed. So it hacked Sony – the studio releasing the movie. And spilled a lot of digital tea. Before Obama left office, he warned President Trump that North Korea would be his biggest foreign policy challenge.

President Trump has vowed that North Korea won’t hit the US on his watch. His strategy has included pressuring China. And getting the UN to pass a new round of sanctions. NK kept working on its nuclear weapons. Earlier this summer, Trump said that he’ll unleash “fire and fury like the world has never seen” if the North doesn’t stop threatening the US. NK responded by saying that it was considering an attack on the US territory of Guam. Meanwhile, Trump’s administration has been scrambling to get on the same page about how to address the threat. Sec of State Rex Tillerson wants to come to the negotiating table. Sec of Defense Jim Mattis says that the military is ready and waiting to intervene if need be. Trump says “all options are on the table.”

North Korea has quickly escalated into America’s biggest global security threat. And Trump doesn’t seem any closer to solving the problem than any of his predecessors.