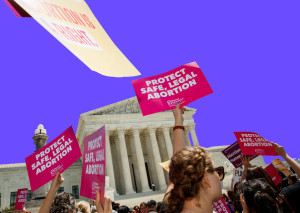 Not easily. It was often dangerous, expensive, and required women to travel far. In some cases, women tried to induce an abortion on themselves, by using coat hangers, throwing themselves down the stairs, or consuming poison. At least one physician operated undercover – and ended up getting arrested. It was possible, but difficult, to get an abortion safely: a 1966 story in The Washington Post quoted a doctor saying a woman could usually have a safe abortion in a hospital if pyschiatrists attested that the patient was suicidal.

So why has it become such a bigger issue lately?

Because there’s an escalating push to get the Supreme Court to revisit the issue. Since President Trump took office, he’s overhauled the nation’s courts by appointing dozens of conservative judges, including two to the highest court there is: the Supreme Court. That’s led to a push by red states to pass restrictive abortion laws that lawmakers know will be challenged in court. The goal: bring this fight to the Supremes at a time when the court has a conservative majority, and may be more likely to overturn Roe v Wade.

We get into the state of restrictive abortion bills, how the Supreme Court is handling the issue, and how it’s impacting the 2020 election in theSkimm app. Every week, the app goes deep on a different news topic to give you the context you need to understand what's going on in the world. Download the app now and you get the first week free.