Betting on the NCAA Tournament 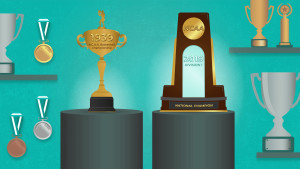 The Story: The Bracket

The NCAA Division I College Basketball Tournament is in full swing. And your office’s bracket pool is taking over your inbox. 47 million Americans are expected to bet a total of $8.5 billion on the men’s tournament this year.  But the chances of winning a perfect bracket are a looong shot: 1 in 9.2 quintillion.  But whether you fill out your bracket based on your favorite teams, favorite players or favorite mascot, understanding what the bracket is and where it came from will help you win at the water cooler.

Give me the basics

The top 64 Division I men’s college basketball teams were chosen on March 17th - Selection Sunday. The women’s Division I teams were chosen on Monday, March 18th. The teams are broken down into regions with 16 teams each and then ranked (1 is the best, 16 is the worst). That’s called seeding. The teams, their region seed and who they are matched up against are what you need to know to fill out your bracket.

Maybe the most famous bracket is at Berkshire Hathaway. CEO billionaire Warren Buffett, the man known as the Oracle of Omaha, offers his employees $1 million a year for life if they perfectly predict which teams make it to the Sweet Sixteen. No one has ever won.

But where did this all bracket madness come from?

It’s widely accepted that betting on the big tournament started at a place called Jody’s Club Forest bar in Staten Island, New York. In 1977, owner Jody Haggerty rounded up some of his regulars and started a pool with 88 people each paying 10 bucks to predict the winners of each game. The winner took home the $880 pot and a tradition was born.

The word got around, and the pool grew. People would line up around the building to put in their 10 bucks. By 2006, there were 150,000 people betting on the games at Jody’s -- hoping to take home the $1.5 million cash pot. The story caught on and after the media started reporting about it, the feds took notice. In the end, Jody’s shut the pool down. But by that time, bracket pools had spread like wildfire among office pools, groups of friends, and on the internet.

If you’re filling out a bracket, get it done by March 20th - that’s the day before the First round in the men’s division begins. But if you’re putting money down - a word of warning. Even though the Supreme Court decided last year that states could write their own laws, sports betting is still only legal in 8 states. Some states have laws that treat friendly pools differently, or have different rules for online betting, but in the past there have been big busts as well.

To get your bracket started, you can download a printable tournament bracket on the NCAA’s website, or fill out an interactive bracket online at CBS Sports or ESPN.

For more on the how the madness works, the history of the brackets, and the rivalries and players to watch this season, listen to our deep dive above.