Coffee with a Shot of Crisis: An Industry in Trouble | theSkimm
Subscribe

Coffee with a Shot of Crisis: An Industry in Trouble 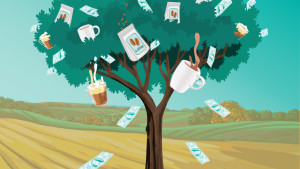 The coffee industry is in crisis mode. True story. Wholesale coffee prices have reached their lowest levels in 13 years. Even though you and hundreds of millions of others keep getting a daily fix, the farmers who produce coffee beans are feeling the pressure. For many of the 25 million coffee farmers around the world, the fall in prices is putting their livelihoods at stake - some are being paid less for their beans than the cost of production.

There are a few factors behind this drama. First, Brazil. The country produces a third of the world’s coffee. Last year they pumped things into overdrive and grew a record amount - causing a surplus. Global coffee demand isn’t keeping up, so prices are driven down. On top of all that, Brazil’s currency is very weak compared to the U.S. dollar. So coffee farmers in Brazil have an incentive to sell more coffee, and they’re able to sell it for less than farmers in other countries.

Climate change. It’s really been heating up in the Bean Belt. That’s the equatorial zone where coffee is grown, with the environmental conditions that allow beans to thrive. But that might not be for long. Temperatures are going up, causing diseases and invasive species to spread. That’s wiping out entire crops. And lots of farmers aren’t equipped or trained to adapt to the threat. Experts say that by 2050, half the land used for farming coffee now will be unusable.

Kind of freaking out here, what can we do?

Companies and organizations are stepping in to help. By doing things like investing hundreds of millions of dollars in things like training farmers and testing new varieties of coffee beans that are more resistant to climate change. Fair Trade cooperatives are also part of the survival equation. They help ensure that coffee farmers get paid enough for their beans to cover the cost of production, no matter how low prices fall, and as long as they meet Fair Trade certification standards.

A lot of people can’t get through their day without a cup of coffee. But millions of coffee farmers are barely able to survive producing it. The historic drop in the price of coffee is causing a lot of farmers to throw in the towel. Some of them have joined the wave of immigrants headed to the US; others have turned to farming other “cash crops” - like coca,  the main ingredient in cocaine. Experts say that over the long term, if more farmers leave their land, coffee prices will eventually go back up - and stay up. Your $5 coffee - just started looking like black gold.