D-Day and the Beginning of the “Special Relationship” 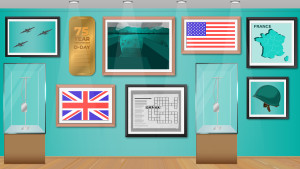 President Trump is scheduled to be heading to Europe in June to commemorate the 75th anniversary of Operation Overlord. AKA the Battle of Normandy. AKA D-Day. He’ll be joined by other world leaders and some of the last survivors of the ally mission that left thousands of Americans dead. But that mission wasn’t just crucial in bringing an end to World War II. It was also a turning point in the friendship between the US and the UK.

Remind me what happened on D-Day?

On June 6th, 1944, more than 150,000 Allied forces from the US, Britain and Canada headed across the English Channel and attacked a 50 mile stretch of French coastline in Normandy. Nazi forces were on the beach ready and waiting. Germany had figured if the Allies were to come to mainland Europe, it would be here. So in the years leading up they constructed a barrier of bunkers and obstacles. It was known as the “Atlantic Wall”.

There were over 70,000 Americans among the Allied troops who stormed Omaha beach and Utah beach. And many lost their lives. Omaha beach was one of the deadliest. So many Americans forces were taken down by heavy German artillery that one of the U.S. generals in charge considered abandoning the whole attack.

But in the end, they persevered and in less than a week, the Allied forces had secured the beaches. And they continued to push the Germans back across France. They eventually liberated Paris, securing a major advantage that would bring the war in Europe to an end within a year.

But what about the “special relationship” thing?

British Prime Minister Winston Churchill knew that this time around, Europe needed to rebuild if it wanted to prevent the “rinse and repeat” that was World War II. In March 1946, he was invited to Westminster College in Missouri as a guest lecturer. It was there that he gave his famous ‘Iron Curtain’ speech, praising the US for its help and coining the phrase “special relationship”. Basically, he was asking for cash money. And it worked: In 1948, President Truman signed the Marshall Plan, which promised over $12 billion dollars of economic assistance to help rebuild western Europe. British and American leaders have been using the phrase ever since. Even when things have not been so “special”.

D-Day was the largest military operation to ever take place on air, land, and sea combined. The 75th anniversary will be commemorated in Normandy and attended by dignitaries from around the world. It could also be the last time surviving veterans will be able to attend the ceremony. But their heroism will never be forgotten.