The Race to the Kentucky Derby 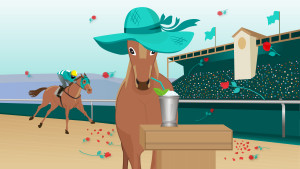 Cue the trumpets, grab your mint juleps, and hold on to your floppy hats: It’s time for the Kentucky Derby. The first Saturday in May marks the 145th annual “Run for the Roses”. Think: the longest continuous sporting event in the US. You might know names like Secretariat, American Pharaoh, and Justify. But there’s a lot of backstory to the “most exciting two minutes in sports” - and what it takes to get there.

The Kentucky Derby has some roots in American history. The guy who started it was Meriwether Lewis Clark Jr. Like a thoroughbred racehorse - he’s got some pretty hot lineage. The idea came to him after went all Eliza Doolittle watching a couple of posh horse races in the UK. Clark came back to his Old Kentucky Home and said ‘I want me one of those.’ So he built a racetrack on Churchill Downs and invited his posh friends for the social event of the season. And that history is still on display: Fashion forward, hats have been a staple in the Kentucky Derby from day one. You can still see anything from a Derby straw bow to a fascinator that looks like a bowl of rice with chopsticks to a wide-brim Southern Belle with an entire replica of Churchill Downs on top. The other tradition holding on strong: Mint Juleps made with Kentucky Bourbon. 120,000 Mint Juleps are the Drink of the Derby. The elite like them in special silver cups.

Wow. But isn’t this about the horses?

Sure. The best toddlers on four legs. Twenty horses - 3-year-old thoroughbreds - qualify by earning points. They come from all over the country - and two from overseas - for their one shot. The horses get most of the attention - but the jockeys are the real “X” factor. They need to be short and light, and strong enough to lead a thousand pound animal like a Daytona 500 driver with a bumper car.

The Kentucky Derby is a pretty big deal - not just for horse fans. You might see anyone from Kim Kardashian to Tom Brady to regular folks joining in for a round of My Old Kentucky Home in the stands. And the owners of the champ will be singing as well when they get their $1.86 million check in the winner’s circle. Make sure to keep your eyes peeled because who knows...there might be a new Cinderella story waiting at the gate.

But horse racing fans don’t stop in Louisville: the Kentucky Derby is just the first step to the biggest prize of all - the Triple Crown. To get the crown, the Derby winner has to take the Preakness and the Belmont Stakes trophy home, too. So far only 13 horses are in that elite club - including the horse crowned last year. And of course “