Socialism Versus Democratic Socialism - And Why Both Are Having A Moment 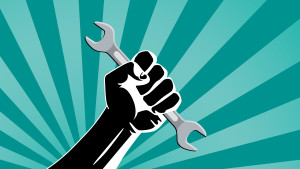 In his State of the Union and weeks later talking to Venezuelans in Miami, President Trump rallied against socialism - and vowed that the US would not become a socialist country. He may have been trying to calm the nerves of Venezuelan ex-pats - those who immigrated from socialist leader Nicolás Maduro. But he was also setting a Republican agenda against a growing number of Democrats who are loving on socialism - at least Democratic socialism - and he was using the class struggle as a talking point.

Remind me again: what’s socialism? And why does it have a bad rep?

Socialism is basically the idea that wealth should be shared in a society - by taking from the rich to give to the poor. (Shout out to Robin Hood.) And that the government decides how to spread that wealth around. It all started during the Industrial Revolution after factory production started replacing the work of skilled artisans. The factory owners - the industrial capitalists - were raking it in, but factory workers were living in Oliver Twist squalor. “Please sir, can I have some more?” Answer: no. The class struggle was real.

German philosopher and economist Karl Marx wrote about it. He said the people who control the money -- the “Capital”  -- control society. And thus, his "Communist Manifesto" was born. Marx wanted to get rid of child labor and give kids free public education. He said workers should get better pay and working conditions. And he said they should take private property from the capitalists and seize control of all means of production.

Working conditions got worse and worse - and Marx’ following grew across Europe and in Russia. One of his biggest fans was a young Russian revolutionary who called himself Vladmir Lenin. After a 1917 worker protest, Lenin started his own revolution. And he took Marx literally - and made socialism and communism happen. By force.

Lenin didn’t just take away rich people’s land and things. He killed his political opponents, clergy, and anyone else who stood in his way. It was called the Red Terror. And his “how to make socialism happen” playbook became legendary. Fidel Castro used the Marxist-Leninist script in 1959 when his revolution took over Cuba. So did Mao in China and the communists in North Korea. Basically most of the countries the US has been in a fight with for the past 50 years.

Ok. But what was that thing about “democratic” socialism?

Turns out you don’t always have to take away all private property or kill people to do socialism.

Vermont Senator Bernie Sanders ran for president in 2016 as a self-identified democratic socialist. He touted the success of the socialist ideals adopted in nordic countries like Denmark and Sweden. And he was really popular among millennials.

These countries are known for having successful democratic governments plus perks like free healthcare for all and tuition-free higher education. They pay for all that stuff with high taxes. And they are frequently high on ‘The Happiest Countries in the World' lists.

Sanders put it on the thing-to-know list… and it looks like millennial democrats are warming up to democratic socialism. Student loan debt in America is at an all time high, and once millennials are off their parents’ health insurance plans when they’re 26, healthcare gets tricky. Millennials are also seeing the impact of income inequality and the kind of class divide that made socialism a thing in the late 19th century.

President Trump and other Republicans have said that socialism for America would be a big mistake - and they’re pointing to the socialism that led to authoritarianism in places like Russia, Cuba, and Venezuela. But Democrats are saying not so fast - and pointing to Democratic Socialist models in Europe.