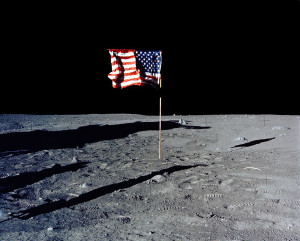 This week is the 50th anniversary of the Apollo 11 moon landing. So we’re taking a walk down memory lane, and looking at the current state of space exploration.

Channel your inner Buzz Lightyear. It’s time for the 411 on space travel.

The modern age of space travel started with the Cold War in the 1950s. USA v Soviet Union. Democracy v Communism. Both wanted to be stronger, better, faster, stronger than the other. And the Soviet Union raised the stakes in 1957, when it launched the first man-made object – an artificial satellite – into orbit. The US said ‘oh it’s on.’

Who doesn’t love some friendly competition?

This competition was pretty chilly, if you know what we mean. In 1958, President Eisenhower signed the National Aeronautics and Space Act into law, which led to the official launch of NASA. And the race to the moon. The US got there first in 1969, when Neil Armstrong put on his moon boots and took that small step. You know the one. Catch up with Skimm Notes. It goes deep on the space race, the Apollo 11 moon landing, and what we learned from it.

Space travel is expensive. In 2011, NASA retired its space shuttles (the ones used to take astronauts to space) because they cost so much to operate and were preventing the org from investing in other tech (think: a new crew exploration vehicle). Now, many astronauts that go into space catch a ride with Russia. We think it’s ironic too.

Working on tech that will allow astronauts to explore further into space. Including someday getting to Mars. Meanwhile, the US wants to shift the bulk of its responsibility of managing International Space Station operations to private companies. And is willing to give access to the space station (think: time aboard) to private-sector astronauts to generate money. Which brings us to the current space race between the companies working to send regular people to the stars. Here’s your rundown:

BTW, you can go down an Elon Musk rabbit hole with Skimm Notes:

Learn more about Bezos and all of his plans for world domination in Skimm Notes:

Just tell me, how close are we to living like Zenon?

Not close. President Trump has gone from wanting NASA to get back to the moon ASAP to telling it to focus on getting people to Mars – since we've been there, done that with the moon. A lot of people want to know if Mars could support human life. NASA wants to figure that out, and has a detailed plan for reaching the Red Planet. By 2033. This will require extensive research, likely a lot of money, and time. Translation: don't go packing your bags anytime soon.

Humans have never set foot on Mars. And there are a lot of opinions about whether we should be dreaming of a new life there.

Team '100% yes' says it’s a lot more complicated than “The Martian” but possible. Things that need to be overcome: spacecrafts crashing into the surface, intense radiation, and less gravity, just to mention a few. But with the right tech, humans could get there...then decide whether to actually stay.

On Team 'absolutely not' Bill Nye (yes, the science guy) argues that humans will never live on Mars, let alone turn it into Earth. Because, well, it can get effing cold. He points to Antarctica, where scientists are stationed but would never want to live permanently.

The R&D and technology stemming from space exploration are basically the foundation of the modern world. Thanks to satellites orbiting Earth, you can find the closest coffee shop on Google Maps, get an Uber to the exact block you’re standing on, and know whether it’s going to randomly rain for an hour tomorrow.

But that’s not all. Infrared ear thermometers use the same tech used to measure the temperature of stars and planets. Robotic innovations by NASA have helped influence the development of more functional artificial limbs. Memory foam, firefighting gear, car tires, portable cordless vacuums...the list goes on.

Exactly. Space is cool. There’s evidence it lures people to pursue careers in STEM. Also, space exploration is an international group project that encourages cooperation and diplomacy. Ultimately, exploring space excites people. And brings us closer to answering some pretty big questions about the planet, and whether life exists outside Earth.

This just got deep.

Just a few more points to make. Living in space could affect human health, leading to vision problems, losing bone density, muscle atrophy, developing a sleep disorder (it’s just harder to sleep in space), and exposure to radiation. But if you ask one of the billionaires we mentioned, they’ll say getting to a point where humans can live in space will be necessary as a growing population has to rely on a finite set of resources here on Earth.

Humans are explorers. Which makes the unknowns of outer space endlessly fascinating. And now, five decades after one of the most significant moments of the 20th century, the world has its sights set on a new ‘giant leap’: hitching a ride to a galaxy far, far away...and saying ‘honey, I’m home.’