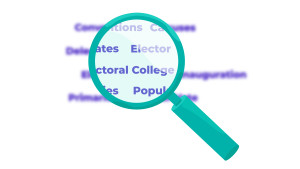 Caucus. Primary. Electoral College. Delegate. They sound fancy, but do you know what they mean? Here are some of the terms to know ahead of the 2020 presidential election.

Where political parties officially nominate a candidate for president. It feels like a big party and looks like one too. Think: lots of patriotic balloons and large crowds. The conventions are also used to solidify a party’s platform.

Meetings run by political parties where participants discuss a variety of topics, including their presidential nominee choice. In presidential elections, some states hold caucuses instead of primaries. The process varies by party. But generally, voters show up in person (think: at a library or community center) to discuss the candidates and cast their vote. The process can take several hours.

People chosen to represent their state at national party conventions. Let’s back up: to become a party’s presidential nominee, candidates need to win a majority of the party’s delegates. During each state’s primary or caucus, there are a certain number of delegates up for grabs, which are awarded based on how well a candidate does in that race. Then at the conventions, the delegates are the ones who officially cast votes to nominate a party’s presidential candidate. There are two main types of delegates: pledged (who have to support the candidate they were given during the primary or caucus) and unpledged or super (who can support any candidate).

How the US chooses its POTUS. To win, a candidate needs a majority of electoral votes (270 out of 538). If there’s no majority, the House chooses the president, and the Senate chooses the Veep. When it comes to actually making it to 270 or more, it goes like this: after you vote for president, your vote goes into a state-wide count. In 48 out of the 50 states (plus DC), the candidate with the most votes gets 100% of the electoral votes for that state. This is known as the winner-takes-all rule. Two states (Maine and Nebraska) give their electoral votes out proportionally.

The official certified rep that votes in the Electoral College. There are 538 electors. Each state plus DC has a certain number of electors up for grabs in a presidential election. Electors are tapped by a state’s political party and are often people with close ties to the party (think: state elected official). They’re the ones who later cast an official vote representing their state’s choice for president. From there, the electors’ votes are sent to Congress, which officially counts them.

The ceremony where newly elected officials are sworn into office. Presidential inaugurations are every four years on January 20. When Jan 20 falls on a Sunday, presidents are privately sworn in ahead of a public ceremony on the 21st.

The election before the general. This is when voters choose who they want as their party's presidential nominee. Some states have closed primaries – where you can only vote for candidates within your registered party. Other states have open primaries – no matter what party you’re registered with, you can vote for any candidate, in any party. And other states do something in between.