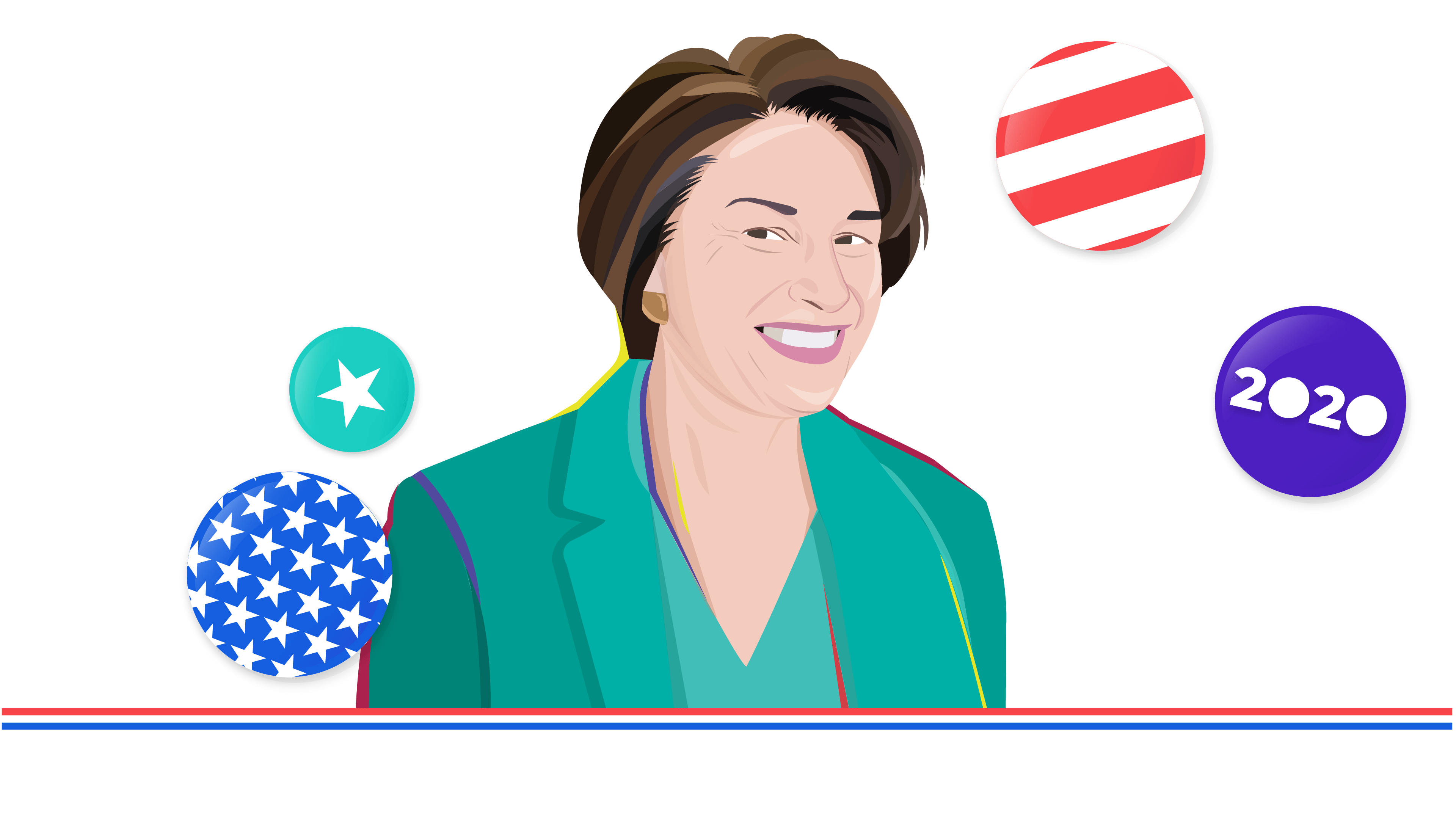 Before taking on Capitol Hill, she was a corporate lawyer and Hennepin County attorney in MN. She’s been a senator since 2006, and has become popular in the Midwest. She’s known as a moderate Democrat who’s gotten support from red voters and worked with Republicans on things like combatting human trafficking and confronting the opioid epidemic.

A Washington Post report put a spotlight on Klobuchar for not prosecuting police officers accused of killing black suspects when she worked for Hennepin County. There’ve also been reports that Klobuchar mistreats her staff. She admitted she’s pushed people too hard at times, but also defended her actions, saying her toughness can help her as president.

Klobuchar’s day one priority: start nominating judges to fill court vacancies. She reportedly won’t release names of potential candidates before Election Day, but says she wants to move quickly on this. She also says she’ll work on tackling climate change in her first week in office. Including getting the US back in the Paris climate deal (which set standards for pretty much the entire world to lower carbon emissions). And reinstating Obama-era rules related to clean power and fuel efficiency that President Trump reversed.

On abortion…she wants to codify Roe v. Wade, meaning she’d work with Congress to pass legislation that protects women’s abortion rights. She’d also appoint judges who support Roe v. Wade and work to repeal the Hyde Amendment. The amendment prevents federal money from being used to cover abortions, unless a woman’s life is at risk or she’s carrying a baby conceived from incest or rape.

On climate change…she’s saying yes to the Green New Deal as an “aspirational” starting point for addressing climate change.  If elected, she plans to intro legislation to get the US to reach 100% net zero emissions in the next 30 years. And like we said, she wants the US to rejoin the Paris climate deal.

On the economy...the Midwesterner is focused on "heartland economics.” Meaning a top priority is helping rural workers and the agriculture industry. That includes adding tax credits to help retrain workers that lose their jobs to automation. She also supports raising the minimum wage to $15 an hour.

On guns…she supports things like universal background checks, and a ban on assault weapons. But she also wants to make sure people who use guns for hunting wouldn’t be hurt by these measures.

On health care…she’s not ready to embrace Medicare for All, but she wants to move towards universal health care that allows people to opt into government-run plans. She also wants to expand Medicare to include anyone that’s 55 and older (as opposed to 65 and older).

On immigration…she wouldn’t decriminalize illegal border crossings. She would back more wall border security funding as part of broader immigration legislation that included a path to citizenship for undocumented immigrants.

On national security…she’d bring some troops home from Afghanistan and Iraq – but is open to maintaining a small presence focused on counterterrorism. She’d boost US cybersecurity to protect networks from countries like Russia, China, Iran, and North Korea. She voted for the Iran nuclear deal and would rejoin it if elected. She’d also hit North Korea and Russia with sanctions for things like cyberattacks and missile threats.

On social justice…she has a few ideas: she wants to reform the presidential pardon system by creating a bi-partisan clemency board and a position that advises the president on criminal justice reform. She’s also interested in: lowering mandatory minimum sentences. Reforming the cash bail system. More funding for public defenders. And reforms that would make it easier for inmates to integrate back into society.

To some, Klobuchar is the Goldilocks of politics – not too right, not too left, juuuust right in the middle. Some thought this – as well as her popularity in the Midwest – could help her win over Dems in cases like the Iowa caucuses. But she’s been trailing behind the front-runners, including another moderate with strong support in the Midwest (hi, Pete Buttigieg).