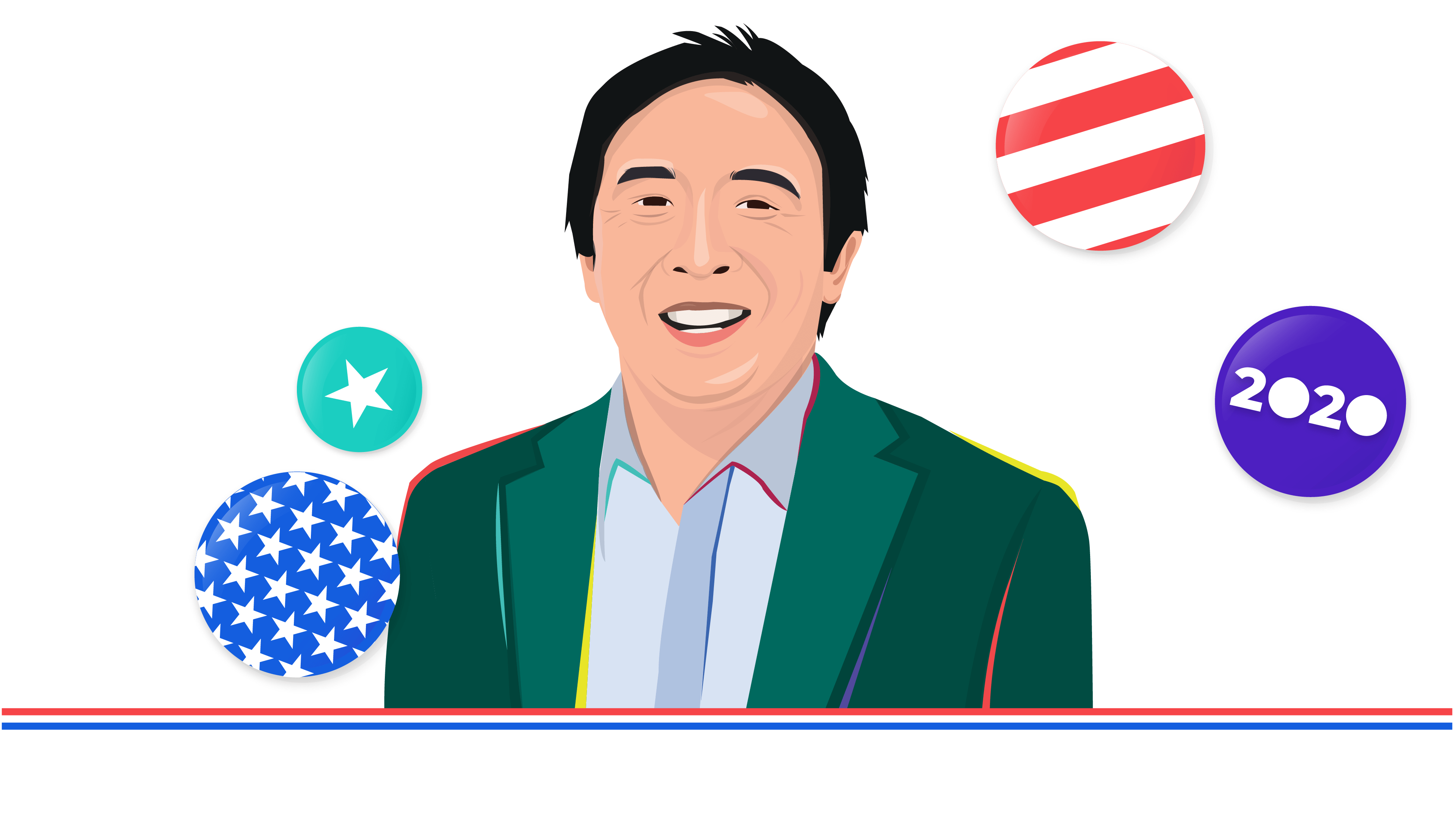 Andrew Yang is running for president because he’s afraid for the future of the country, saying new tech (think: robots, software, artificial intelligence) has “destroyed more than 4 million US jobs.”

He’s a former tech executive and author. He worked briefly as a corporate lawyer and later started the nonprofit Venture for America, which helps place young entrepreneurs at start-ups across the country.

He has no political experience and is not well-known. On the campaign trail, he’s embraced his Taiwanese American background, as well as some of the stereotypes associated with Asian Americans...and it may or may not be working.

On the economy…repeat after Yang: Universal. Basic. Income. This is his signature policy. His goal is to give $1,000 a month to every American adult. No conditions. He’d fund this by consolidating some welfare programs and implementing a 10% value-added tax (a tax on the production of goods as they goes through the supply chain). Why? To fight the fact that technology is displacing a lot of workers, and help millions of Americans living below the poverty line. He’s rebranded the concept as the Freedom Dividend, a phrase he says tests better with conservatives. Because, politics.

On guns…he wants a tiered licensing system that would have increasingly stricter requirements in order to own and operate different types of firearms. All gun owners would have to pass a federal background check. And anyone with a history of violence, domestic abuse, or violent mental illness wouldn’t be able to get a license. He would implement a federal buyback program for anyone who wants to give up their firearms.

On climate change…he supports the Green New Deal and wants to invest in tech designed to fix the damage already done to the environment. For example: placing mirrors in space to reflect the sun’s radiation away from Earth. He also wants to end current tax benefits for fossil fuel companies.

On health care…he supports Medicare for All and wants to begin a national anti-stigma campaign for mental health issues called “Everybody Needs Help Sometimes.” He also wants to encourage health care systems to make mental health part of primary care. He supports a woman’s right to an abortion in all instances and plans to appoint judges who support that.

On everything else...Yang has a lot of unique ideas. He wants to lower the voting age to 16 for federal elections, gov health care plans to cover marriage counseling, compensate NCAA athletes, and create a high school exchange program within the country.

Yang’s universal basic income proposal has helped him stand out from the crowd. It’s unclear if it's enough to make him a serious contender – although Silicon Valley seems to be on board. Plus, he’s reportedly ahead of better-known names like Sen. Kirsten Gillibrand (D-NY) and NYC Mayor Bill de Blasio (D). And it’s still early enough in the race that anything could happen (remember 2016?).