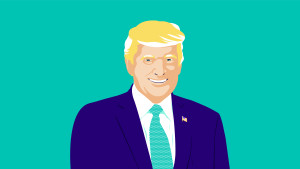 He’s been trying to Keep America Great since 2017. But before that: he was a real estate mogul, serving as chairman and president of the Trump Organization (see: his Trump Towers around the world). You also might know his catchphrase “you’re fired” from when he hosted “The Apprentice” in the ‘00s. He co-wrote a few books, like “The Art of the Deal,” and created Trump University...but that didn’t turn out so well. Plus he’s got a couple of TV and movie cameos on his IMDB page.

Let’s start with pre-White House. He’s been accused of shady business tactics, like dodging millions in taxes and racially discriminating against tenants. And got heat for questioning whether former President Obama was born in the US. During the 2016 campaign, a video came out of him saying it’s OK to grab women “by the p*ssy.” Since then, more than a dozen women have accused him of sexual misconduct, from inappropriate touching to sexual assault. He’s denied the allegations.

Since taking office, he’s been in hot water for some controversial policies, like his “zero tolerance” policy and travel ban from some Muslim-majoirty countries. Also, for seeming to give Turkey the green light to target Kurdish allies in Syria. He’s also called the media the “enemy of the people.” The Mueller investigation did not find evidence of a Trump-Russia conspiracy. But it did list 10 instances of possible obstruction of justice.

And then there’s impeachment. Trump is the third-ever US president to be impeached. Last year, Trump seemingly pushed Ukraine’s president to announce investigations, including into his political rival and former VP Joe Biden. He did this while his admin withheld nearly $400 million in aid. The Democratic-led House voted almost entirely along party lines to impeach Trump, charging him with abuse of power and obstruction of Congress. But this year, the Republican-led Senate acquitted him, also mostly along party lines. Now, Trump is the first-ever US president to run for re-election after being impeached.

Trump hasn’t been super specific about his second-term priorities. Until recently, the economy – with its record-breaking jobs numbers – has been a source of pride. That’s changed with COVID-19, as unemployment rates have skyrocketed. But Trump has made it clear that the economy remains his focus, pushing states to reopen and stating that he doesn’t want the cure for the virus (staying home, closing businesses) to be “worse than the problem itself.”

There's also immigration. In the 2016 race, Trump campaigned on building a US-Mexico border wall. He continues to try to restrict and reform both legal and illegal forms of immigration – pushing to have more merit-based immigration and restrict family and low-income immigration.

On abortion…he’s against abortions except in three instances: rape, incest, and if the mother’s life is at risk. And his administration implemented rules that would make it easier for healthcare workers to refuse to perform abortions and other services if they violate their religious or moral beliefs.

On climate change…he’s moved to end the Obama admin’s Clean Power Plan and weakened regulations on auto and methane emissions and water pollution. He’s argued that many rules put in place by the Obama admin made it harder for US companies and the energy industry to do business. He’s also got a plan underway to pull the US out of the Paris climate deal by November.

On the economy…one thing he’s been especially proud of is the Republican tax plan, which was the biggest tax rewrite in decades. And during his first term, the unemployment rate dropped to a 50-year low. That changed with COVID-19. Unemployment rates soared, with tens of millions of Americans put out of work. In response, Trump signed a $2 trillion economic stimulus bill, among other packages, to help businesses and Americans affected by the crisis. That’s in addition to the moves he made before COVID-19 to try to keep US jobs at home (see: steel and aluminum tariffs, ditching the TPP). He also renegotiated a new trade deal with Canada and Mexico. After launching a trade war with China, his admin is in the process of re-doing trade terms with the country – though the status of those negotiations is unclear amid tense US-China relations.

On education…his admin set aside tens of billions of dollars for things like helping students continue to learn from home amid the pandemic. And is letting people with federal student loans pause their payments for now. Beyond COVID-19, his admin has reworked how schools need to address sexual misconduct allegations to keep federal funding – including limiting the definition of sexual harassment. He also supports school vouchers, which give students public funds to go to non-public schools (think: private or charter). He wants to fix the student loan crisis by doing two things. One: cap the amount of student loan debt students and parents can take on. Two: reduce the number of repayment plans available to them.

On guns...he’s gone back and forth on limiting the right to bear arms. Back in 2018, he banned bump stocks, which can make semi-automatic weapons fire more quickly. He wants more states to adopt red flag laws, which allow courts to temporarily take away guns from potentially dangerous people. He’s also called for giving teachers guns to control school shootings.

On health care…he signed legislation that makes COVID-19 testing free. His admin is also telling hospitals 'don't worry' – it'll foot the bill for uninsured Americans suffering from the virus. He hasn’t repealed and replaced the Affordable Care Act, like he said he would on the 2016 campaign trail. But he has rolled back the individual mandate, eliminating the tax penalty for not having health coverage. He’s also pushed to lower prescription drug prices and have more transparency in drug pricing.

On immigration…he has temporarily suspended approval of green card applications to ensure unemployed Americans will be "first in line" for jobs as the US economy reopens. And closed the US-Mexico border to all but essential services amid COVID-19. He and his admin have also suspended immigration from multiple majority-Muslim countries, launched a program to have asylum seekers wait in Mexico while claims are processed, and capped the number of refugees admitted to the US. He hasn’t gotten his wall, but he’s still trying to get more funding for border security, which would go to things like aid for unaccompanied minors. He’s also tried to end asylum protections for most migrants who arrive at the US-Mexico border.

On national security...the House impeached the president on national security grounds over withholding aid to Ukraine. So there’s that. He’s called Afghanistan and Iraq “endless” foreign wars and pledged to get the US out ASAP. He’s got a reputation for trying to work things out with adversaries, like North Korea and the Taliban. In 2018, he pulled out of the Iran nuclear deal, saying it didn’t do enough to combat the nuclear and ballistic threat from Iran. And last year, he removed troops from northeastern Syria as Turkey announced it would be launching an operation against US-backed Kurds in the country.

On social justice…he’s had a mix of reactions to the George Floyd protests. First he called for accountability over Floyd’s death. Then he called protesters “thugs” and added “when the looting starts, the shooting starts” – a tweet that Twitter blocked for violating its policy against “glorifying violence.” He’s since pushed governors to get protests under control, threatening to deploy the US military if they don’t.

Meanwhile, back in 2018, he signed the first major overhaul of prison sentencing in over a decade. It did things like lower certain mandatory minimum sentences and ensure that inmates are within 500 miles of family. He also made headlines for commuting the sentence of Alice Marie Johnson, who was serving a life sentence for a first-time, non-violent drug offense. But he’s been accused of restricting rights for LGBTQ+ Americans, and has barred most transgender Americans from serving in the military.

Trump’s overall approval ratings remain pretty low compared to other presidents. But he’s still popular with Republican voters. And the last time a president wasn’t reelected for a second term was in 1992.