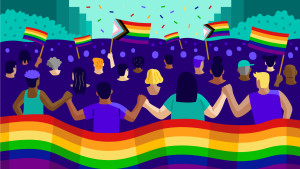 There are more than 11 million LGBTQ+ adults in the US. And many are concerned about discrimination.

In June, SCOTUS ruled that the 1965 Civil Rights Act protects LGBTQ+ employees from workplace discrimination. It was a landmark ruling – before then, more than half of US states lacked workplace protections for LGBTQ+ employees. Now, many are calling on lawmakers to pass the Equality Act, which passed in the Democratic-led House last year but isn’t expected to go up for a vote in the GOP-led Senate. The bill would enshrine protections in areas beyond employment, including in housing and education.

Meanwhile discrimination persists in the military, with transgender Americans banned from openly serving. And state laws can leave the door open for churches, businesses, and other organizations to discriminate against members of the LGBTQ+ community. There’s also concern for LGBTQ+ Americans’ safety. One 2017 poll found that more than half of LGBTQ+ Americans have experienced violence, threats or harassment. And FBI data shows that anti-LGBTQ+ hate crimes have been on the rise in recent years, accounting for almost one in five hate crimes in 2018. Hate crimes against black transgender women in particular are believed to have spiked. This year, the killings of two black transgender women – Riah Milton and Dominique “Rem'mie” Fells – sparked protests across the country.

LGBTQ+ Americans have seen some key civil rights victories in recent years, including securing the right to marry and protections from discrimination in the workplace. But many still face the threat of discrimination, harassment, and violence in their everyday lives. Here’s where the candidates stand: