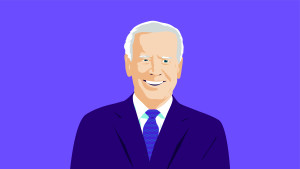 Former VP Joe Biden wants an office upgrade. And he’s aiming for the most important one of them all: the Oval Office.

Before serving as former President Obama’s veep, Biden was Delaware’s longest-serving senator – first elected in 1972 at age 29. This is his third run for president (he also ran in the 1988 and 2008 races).

First off, there’ve been more than a couple gaffes. Biden’s also been in politics for a long time, which means he has a few skeletons in his closet. See: his push for anti-busing legislation during the school integration era of the ‘70s. He’s also gotten pushback over his support for a ‘90s-era crime bill some say contributed to mass incarceration. He's gotten flak for voting for the Iraq War, and how he handled Anita Hill’s testimony during Supreme Court Justice Clarence Thomas's confirmation hearing. In 2019, multiple women accused him of unwanted hugs and touching. He issued a video apology. He also apologized after saying in an interview that black voters torn between him and President Trump “ain’t black.”

On top of all this, Biden was tangled up in the impeachment case against Trump. The one where House Democrats accused the president of seeking a foreign government’s help digging up dirt on a political rival. Here’s the context: In 2016 when he was VP, Biden pressured the Ukrainian gov to fire its top prosecutor, who was widely seen as failing to fight corruption. At the time, Biden’s son sat on the board of a Ukrainian natural gas company that the prosecutor had been looking into. Cue Trump speculating that something shady was going on and asking Ukraine to look into it. (Note: the EU also called for this prosecutor to be removed, and there’s no evidence that Biden or his son did anything illegal.)

Biden says that his no. 1 legislative priority would be passing the Equality Act to ban discrimination against the LGBTQ+ community when it comes to things like jobs, housing, education, and public spaces. Health care is also top of mind. As in, Biden’s proud that the Obama admin got the Affordable Care Act passed, and wants to “build” on it by letting Americans opt into a public health insurance plan.

On abortion...he has a mixed record on the issue, which he’s struggled with as a devout Catholic. In 1982, he voted for a bill that, if passed, would’ve let states override Roe v Wade. He has since said he’d defend Roe v Wade as president. He said he no longer supports the Hyde Amendment (which bars federal funding going toward most abortions)...a day after his campaign said he still supports it.

On climate change...something he's been saying 'mayday' about since the 1980s. He calls climate change "the greatest threat to our security." So what's he going to do about it? Rejoin the 2015 Paris climate deal on his first day in office. Start a "major diplomatic push" to get other countries to up their emissions-cutting ambition. Get the US to net-zero greenhouse gas emissions no later than 2050. Btw, he'd foot his climate change plan by reversing Trump's 2017 corporate tax cuts.

On the economy...he’s said the US needs to meaningfully reduce COVID-19 case numbers before the economy can reopen. And enact paid leave for all Americans. He also wants to address income inequality and workers’ rights. Some highlights: let's enact a $15/hr minimum wage and ban non-compete agreements that stop workers from taking jobs with competitors. He also wants to reverse Trump’s tax law and give tax credits to lower income families.

On education…he supports providing funding to help with remote learning due to the pandemic. And student loan relief until the "worst" of the crisis is over. He also wants to offer two years of free (read: taxpayer-funded) community college or job training and universal pre-k for three and four-year-olds. He’ll reinstate Obama-era policy that aims to make sure schools are working to desegregate, and wants to triple funding for schools with a high percentage of students from low-income families. Plus give teachers an assist by upping their paychecks and providing them more help with student loan forgiveness.

On guns…he supports several changes to gun policy, including reinstating an assault weapons ban, setting up a voluntary buyback program to get weapons off the streets, and closing loopholes on background checks. He might get some questions about his record on this issue. That's because in the 1980s he voted for the Firearm Owners Protection Act, which allowed gun dealers to sell weapons through the mail, online, and at gun shows. (The NRA called it "the law that saved gun rights.”)

On health care…he supports free COVID-19 testing and eliminating “all cost barriers” to preventive care and treatment of the virus. And says he’s ready for the gov to foot the bill for addressing the pandemic, whatever the cost. Beyond COVID-19, he wants to expand the Affordable Care Act by giving Americans the choice of a public health insurance option, in addition to letting people keep employer-based plans. He would give Medicare the power to directly negotiate drug prices. He also plans to let consumers get prescription drugs from other countries to create more competition for US drug corporations.

On immigration…he’s against decriminalizing illegal border crossings but acknowledges the “pain” caused by the three million deportations that happened under the Obama admin. He supports DACA and a path to citizenship for undocumented immigrants and has pledged to undo Trump’s 2017 executive order that restricts travel from several Muslim-majority countries.

On national security...he wants to bring most troops home from Afghanistan and focus specifically on tackling al-Qaeda and ISIS. He’d end US support for Saudi Arabia in the war in Yemen. And re-enter the Iran nuclear deal as long as Iran follows the rules.

On social justice…he’s got a few critics. Some say he contributed to mass incarceration since he helped write the '90s crime bill. And he voted for “don’t ask, don’t tell” as a senator, a military policy that prevented openly gay people from serving (it was lifted in 2011). He’s since evolved his approach to LGBTQ+ rights (see: his priorities above). He’s been vocally supportive of the George Floyd protests and has reiterated his call for police reform, including better training for de-escalation and a commitment to use the Justice Dept to “root out unconstitutional or unlawful policing” across the US. Meanwhile, he would decriminalize marijuana, leaving it up to the states to decide whether to legalize it.

On the one hand: Biden’s seen as a popular moderate who could win over swing voters needed to defeat Trump. On the other hand: he’s an establishment candidate that younger voters might not feel properly represent the interests of a more diverse and progressive demographic.