Get to Know Mike Pence 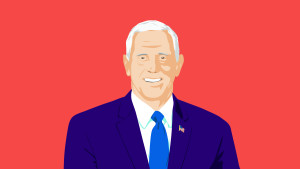 Vice President Mike Pence wants to keep being America’s no. 2.

He’s alienated a lot of LGBTQ+ Americans. As Indiana’s governor, he signed a law in 2015 that allowed Indiana businesses and citizens to cite religious freedom as a legal defense. Supporters said the law was necessary to protect religious freedom. But critics said it would let businesses discriminate on the basis of religion, especially against the LGBTQ+ community.

After companies, musicians, and sports leagues threatened to stop or reduce business in the state, Pence signed an amended version clarifying that the law wouldn’t allow discrimination based on sexual orientation.

Pence has also publicly endorsed some of President Trump’s polarizing statements and policies. Before joining the administration, Pence publicly criticized Trump for the “Access Hollywood” tape and Trump’s call for a Muslim ban. But since then, he’s been less willing to depart from the president. When Trump said there were “very fine people on both sides” of a rally including white nationalists, Pence called what happened there a “tragedy” and said “I stand with the president.” And when Trump implied immigrants from Haiti and African countries were from “sh*thole countries,” Pence defended the president, saying Trump's comments spoke to his desire to create an immigration system that puts America's interests first.

Sometimes vice presidents don’t seem like they get a ton of respect. But the number two job can be extremely important. First, for the obvious reason – the VP becomes president if the president dies or resigns. Fourteen former vice presidents have gone on to become president. And while Trump’s doctor has given him a clean bill of health, he’s among the oldest presidents ever to serve. Sounds grim, but the VP has to be prepared to take over if necessary. Second, the vice president can serve as a tie-breaker in the Senate. And in a chamber where there’s been only a handful of vote differences between the two parties, Pence has had sway on everything from banking regulations to confirming judges to letting states cut funding for abortion clinics.

Pence has had a wide range of responsibilities in the Trump admin, starting with helping to get it staffed as head of Trump’s transition team. Trump also had him lead a commission on voter fraud (which reportedly didn’t find much evidence of it) and a team dedicated to revitalizing space exploration. Pence has sometimes served as a bridge from the admin to Congress, including in negotiations over the 2017 tax reform bill. And he’s represented the admin abroad, including in Afghanistan, Israel, and Latin America.

In February 2020, Trump appointed Pence to head up the coronavirus task force – Pence’s highest profile position yet. In that role, the veep has been tasked with coordinating the COVID-19 response between federal agencies and keeping the American public informed about the outbreak and travel rules, among other efforts.

On abortion…he’s opposed. At one point, Pence reportedly said he wants Roe v. Wade “consigned to the ash heap of history.” And has also said abortion could end “in our time.” Pence was also the first VP in history to attend the annual anti-abortion March for Life rally. As Indiana’s governor, he signed a law barring abortions based on a fetus’s race, sex, or disability, parts of which were later struck down by a federal court. As congressman, he worked to defund Planned Parenthood – and as veep he cast the tie-breaking vote to allow states to withhold federal funding to abortion clinics. He has also co-sponsored legislation that would’ve treated a fertilized egg as a person.

On climate change...he doesn’t necessarily see it as a major threat. As governor, he threatened not to implement the federal Clean Power Plan, which put restrictions on CO2 emissions from power plants. Pence had argued the plan – which didn’t go into place – would raise electricity prices and hurt the economy. As congressman, he voted to limit the EPA’s authority on water quality, repeal energy efficiency requirements for lightbulbs, and expand offshore drilling.

On the economy…he’s all about tax cuts and smaller government. In Indiana, Pence got the state to pass its largest ever income tax cut. He also got rid of the inheritance tax and lowered taxes for businesses. He also advocated for tax cuts in the lead up to the 2017 GOP tax bill. (Studies found the plan cut many Americans’ tax bills, but especially benefited wealthier Americans.) And as a congressman, he pushed to cut federal spending. But Pence and his boss don’t agree on everything biz-related. Pence voted against the 2008 auto bailout (Trump supported it). He has also supported the Trans-Pacific Partnership trade deal (Trump was against).

On education…he’s all about options and letting states take the lead. Pence supports school choice – when the gov gives parents a financial assist to send their kids to a school other than the public school near them (like charter or magnet schools, or even private schools). He cast the tie-breaking Senate vote to confirm charter school advocate Betsy DeVos as education secretary – the first time a VP had ever cast the deciding vote in a Cabinet nomination. In Indiana, he pushed the legislature to start a publicly-funded pre-K program that provided scholarships for thousands of kids. But has generally supported a smaller role for the federal government in education, including not having the feds set curriculum standards.

On guns...he’s all for the Second Amendment. In 2018, he and Trump apparently became the first ever Prez-VP duo to address the NRA together. Pence later told the org that “under this president and this vice president, no one is taking your guns.” Still, Pence has largely stood by Trump's back-and-forth approach to gun access. He spoke with governors to promote Trump’s call to overhaul gun laws. That included a push to strengthen background checks, ban so-called bump stocks, and raise the legal age to buy certain types of guns. But the Trump admin later moved away from pushing those issues.

On health care…he’s not about government involvement. But he makes exceptions. As a congressman, Pence voted against Obamacare, calling it a "government takeover of health care." But as governor, he made use of the program to expand Medicaid, giving coverage to hundreds of thousands of Indiana residents. Pence has also faced scrutiny for his response to the state’s 2015 HIV outbreak – the worst in the state’s history. For months, Pence resisted public health recommendations for a needle exchange program to confront the epidemic, out of concern it could encourage drug use. After he ultimately relented, HIV case numbers went down.

On immigration…he’s stood by Trump on some of the president’s signature immigration policies. That includes ultimately endorsing the travel ban (after first criticizing it) as well as the border wall and migrant detention. As governor, Pence tried to block Syrian refugees from resettling in Indiana. And as a congressman, he co-sponsored bills that sought to challenge the existing birthright citizenship law and make English the national language of the US.

On LGBTQ+ rights…as mentioned, he’s faced criticism. That includes signing a law critics said would let businesses discriminate based on sexual orientation, criticizing former President Obama’s guidelines to let transgender students use the bathroom of their choice, and opposing the 2010 repeal of the military’s “don’t ask, don’t tell” policy.

On national security...he generally sticks with the Republican Party. As congressman, he sat on the Foreign Affairs Committee and voted for the Iraq War in 2002. He came out against the 2015 Iran nuclear deal when he was governor and pushed the EU to withdraw from the deal after the US left. In 2016, he wanted the US to take military action against Syria’s Assad regime – which Trump didn’t want. Trump’s former national security advisor John Bolton says Pence pushed the admin to take a tougher stance on China, Russia, and Syria, among others.

On racial equality…his reaction to the George Floyd protests has been mixed. He reportedly supported the idea of Trump invoking an 1807 law to deploy the US military to respond to demonstrations. But he also backed “the right of Americans to peacefully protest.” Some said that didn’t square with his 2017 decision to walk out of an NFL game after players knelt during the national anthem. Pence also refused to say “Black lives matter” when an interviewer asked him about it, responding instead that “all lives matter.”

Pence is known for his near unflinching loyalty to President Trump. And he’s seen as an important bridge for Trump to the evangelical community, calling himself a “Christian, a Conservative, and a Republican – in that order.” If the duo wins a second term, Pence may run for the big job himself, as soon as 2024.