Nearly All Skimm'rs Plan to Vote in the 2020 Election 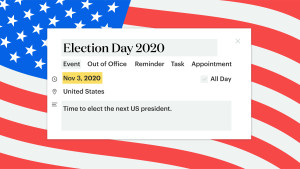 We recently surveyed our audience to check in on them ahead of Election Day. The good news: almost all of them (98.7%, to be exact) said they are likely to vote or have already voted. Almost. All.

What about the rest?

Just 1.2% said they were very unlikely or somewhat unlikely to vote. Mostly because they’re not excited about either candidate. That’s especially true for millennial women compared to other age groups we surveyed.

So who are voters supporting?

Nearly 88% of those surveyed are Team Biden. 6.5% are Team Trump, while the rest are either undecided or support write-in candidates. The bummer is that regardless of political affiliation, 94% of respondents said they were either “very dissatisfied” or “dissatisfied” with the state of the country.

The year 2020. Actually, we don’t know specifically. But we did ask people what issues are important to them. Racial justice and COVID-19 were at the top of the list among all respondents, although the answers varied widely between Trump and Biden supporters. For example, nearly 87% of those who said they’ll vote or have voted for Biden said COVID-19 was “very important” compared to 31% of Trump supporters who said the same.

What issues are Trump supporters focused on?

So most people have made up their minds. Now what?

Our audience is not happy about the state of the country. But most plan to do something about it, by making their voices heard at the ballot box.

Methodology: This survey was conducted Oct. 6, 2020, distributed to a random, representative group of 70,000 subscribers of theSkimm. We received 13,848 eligible surveys valid for analysis. The figures noted in this article exclude responses from ineligible voters.