September Democratic debate: What to watch for 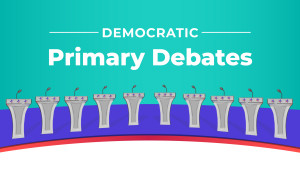 Another round of ‘America's Next Top President’ is here.

Yep. The DNC plans to hold 12 Democratic debates during the 2020 election cycle. This is just the third. It goes down Thursday Sept. 12 at 8pm ET at Texas Southern University – a public, historically black university. The debate will air live on ABC and in Spanish on Univision. It’ll also be live-streamed. Oh and bring snacks. It’s expected to last three hours.

Did I hear you correctly? This is just one night?

Yep. The qualifying standards were tougher this time around and only 10 candidates made the cut. Meaning they can all fit on the same stage.

So exciting. It’s the first time the leading candidates will all share the same stage. And the podium order was determined by polling averages, with the highest polling candidates near the center. From left to right, it’ll be:

Tell me how it’s going to go.

A few things to keep your eye on:

Biden vs everyone else…Biden is still the frontrunner. And everyone else will be trying to take him down a notch. Warren and Sanders, who rep a more progressive wing of the party, could tag-team to challenge Biden’s moderate policy positions on issues like health care (he opposes Medicare for All, but would expand coverage) and climate change (he’s embraced the framework of the Green New Deal, which some say wasn’t enough). At the same time, they could focus more on challenging each other as they fight for the progressive vote.

Guns…This debate comes after several mass shootings in recent months (see: Dayton, El Paso). Expect the candidates to use their time with the mic to push their gun control policies, while also calling out the GOP’s rhetoric – such as linking these attacks to video games and mental health problems, instead of loose gun laws.

Climate…The issue is front and center right now. 1. Because candidates are coming into the debate about a week after getting grilled on how they plan to tackle climate change at a CNN town hall. For seven hours. 2. Because of the devastation left by Hurricane Dorian in the Bahamas. And 3. Because of international concern about the long-term impact of the wildfires in Brazil’s Amazon rainforest. Don’t be surprised if the stage turns into a game of ‘anything you can do, I can do greener’ as candidates outline their policies.

The Democratic field has started to narrow. Seven people have dropped out and this debate is the first to put such a bright spotlight on the frontrunners. It also means the lower-polling candidates on stage still have a shot at making waves. Translation: expect everyone to come equipped with their fighting words.