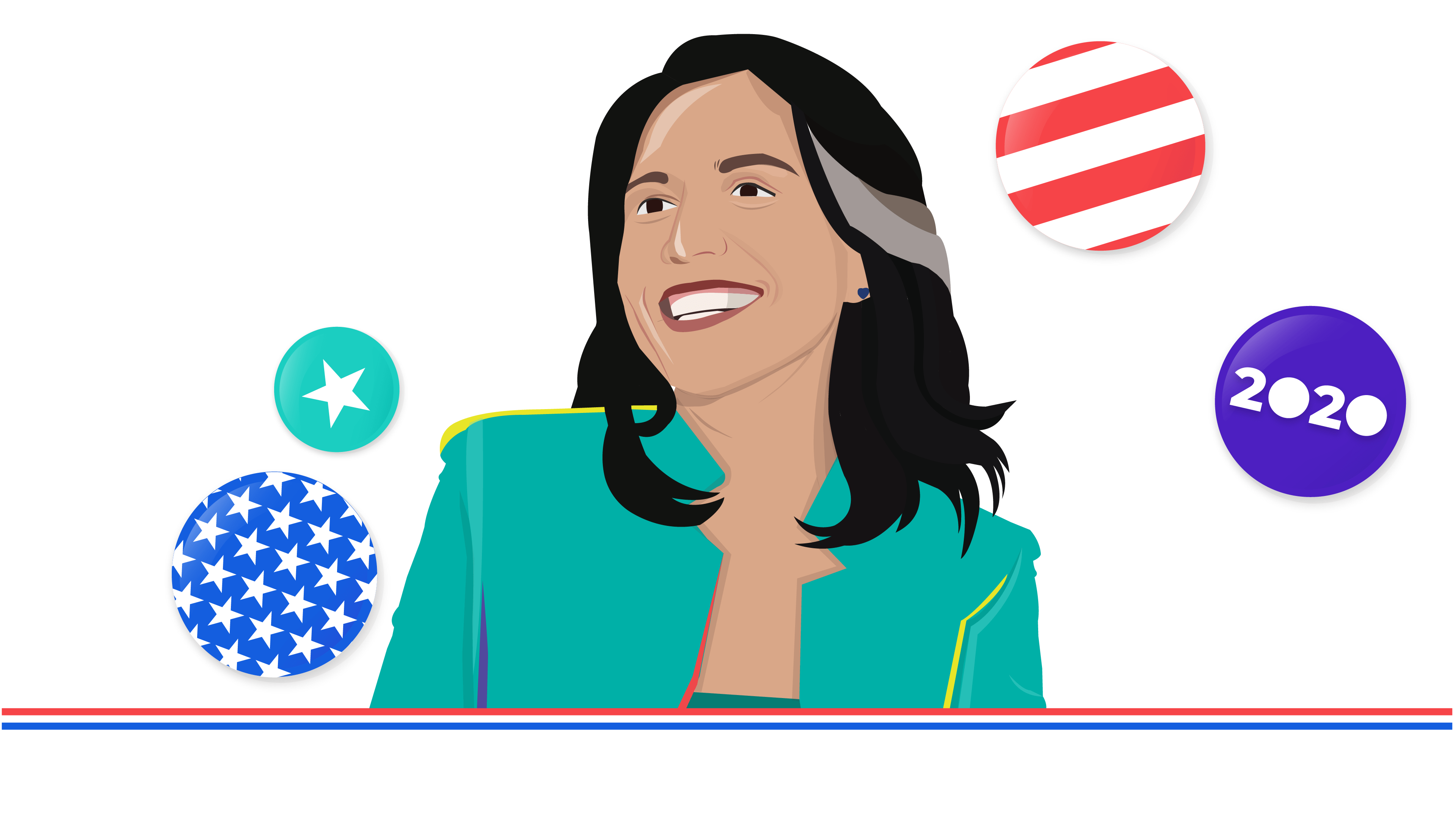 Rep. Tulsi Gabbard (D-HI) is hoping to say ‘aloha’ to the White House.

Gabbard was the first American Samoan and first Hindu member elected to the House of Representatives, where she’s been since 2013. Before that she was in the Army National Guard, and deployed twice to the Middle East. At 39, she’s the youngest candidate in the race.

She’s gotten a lot of sh*t for meeting with Syrian President Bashar al-Assad in 2017. That’s because Assad has been accused of using chemical weapons against civilians during Syria’s years-long civil war. And the international community generally views him as a cruel dictator. Gabbard’s also come under fire for her past work with an anti-gay organization her father ran and for making anti-gay statements. She has since apologized, mentioning that she grew up in a conservative home but her views have changed.

She has a couple, including transforming US health care into a single-payer system, securing US elections against foreign interference, and addressing climate change. But reducing US military activities abroad is a primary focus of her campaign, and something she has firsthand experience with. She served as a member of the National Guard in Iraq. As she puts it, she wants to “withdraw America from ongoing conflict that achieves nothing and wastes so much.”

On abortion…early in her career, she was anti-abortion. She’s now pro-choice.

On climate change…she intro’d a plan in Congress that would do a few things, including transition the US to 100% renewable energy by 2035. Still unclear what her plan would look like as president.

On the economy…she says she’d raise minimum wage to $15/hr by 2024, then tie it to median wage growth. She also introduced legislation to further regulate Wall Street.

On education...community college should cost the low low price of...nothing. Same for public universities for families that make $125k a year or less.

On health care…she gives Medicare for All a thumbs up, but with the option for Americans to stay on private insurance if they want to.

On immigration…she supports a path to citizenship for undocumented immigrants and increased funding for agencies that process asylum claims. She says she’d also “compassionately secure our borders.”

On national security…her favorite talking point. Gabbard is known for sounding off against foreign military intervention. And says that if the US was less tangled up abroad, the country would have more resources (read: money) to put toward domestic issues like health care and education. As president, she’d jump back into the Iran nuclear deal, and cool it on the drama with nuclear-armed countries (see: North Korea, Russia, China). Because make love, not war you know?

On social justice…she had previously opposed a bill for same-sex civil unions in Hawaii. Now she supports the Equality Act, which would ban discrimination against the LGBTQ+ community when it comes to things like jobs, housing, education, and public spaces. She’d also legalize marijuana.

Gabbard has been considered a rising Dem star. But her presidential campaign had a rocky start – see: her campaign manager peacing out just a few weeks after she entered the race. And some say her strategy may be more about moving the party toward her non-interventionist foreign policy outlook than about winning the White House.