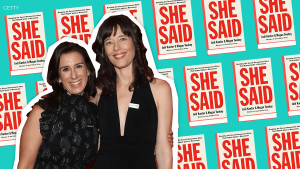 Meet Words With Author Friends, a new Q&A with theSkimm’s favorite authors. First up: Jodi Kantor and Megan Twohey. Their reporting on the Harvey Weinstein scandal helped spark the #MeToo movement. Now they've written a book, “She Said,” that goes behind the scenes of their reporting and the lengths Weinstein went to to try and stop them.

Two reporters, many brave sources, and a story that sparked more change than any of them had ever imagined.

Investigative reporters (and proud of it).

At the Times. In our apartments in Brooklyn. Sometimes while hiding from our children. But writing is actually a relatively small part of investigative journalism — we probably used more total word count in our carefully phrased texts to sources than we did on the first Weinstein article.

In the case of our book: a lot of our story consisted of secrets. Things that were off the record even after we broke the Harvey Weinstein story in 2017. Facts about Weinstein and who helped him that still hadn’t come to light. So in order to write our book, we had to do a lot more digging, and going back to some sources to persuade them to come out of the shadows.

Think of our bravest sources, like Laura Madden, one of the first two women to go on the record about Weinstein. Just as the story was going to press, she was about to undergo post-breast cancer surgery — a mastectomy and reconstruction.

"Impact," as in journalistic impact.

"Correction," as in, we got something wrong in an article.

Newspapers don’t allow for writer’s block. The deadline is the muse.

MT: To leave a reporting job at The Moscow Times after working there for less than a year, acknowledging that reporting in Russia was much more difficult than I had ever imagined and that my best move was to throw in the towel.

JK: Dropping out of law school to pursue journalism. I had always been a journalism junkie but lacked the confidence to think that I could be the one writing or editing the stories. Finally, faced with the prospect of becoming an unhappy attorney, I allowed myself to make the leap. Many others told me it was a huge mistake. My parents were pretty horrified. But within two weeks of becoming an assistant at Slate magazine, I knew I was home.

JK: A psychologist, which accounts for some of the difference in our reporting styles.

Establish a schedule and the discipline to stick to it. When we took a leave from the New York Times to write this book, we rented a windowless office that was a 20-minute walk from our apartments. We were there every day from 9am to 5pm, with strategic yoga breaks.

Wait around for inspiration to hit.

The freedom of reporters in our country, and across the world, to document the truth and hold the powerful to account.

Since returning to the Times newsroom, we have both been swept up in reporting on Jeffrey Epstein, a story that has more questions than answers right now.

Don’t get too comfortable with the highs — or the lows.

JK: Anything by Madeleine L’Engle.

PPS: "She Said" is editorially selected, but if you purchase it, theSkimm may get something in return. Thanks.