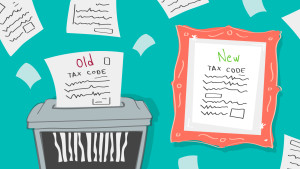 Standard deductions: They’re a lot bigger now. As in nearly double what they were before the new tax law. Meaning if you take the standard deduction (vs itemize), a lot more of your income is exempt from taxes.

Mortgage: If you bought a house last year, you’ll be able to write off up to $750,000 from the interest on your mortgage. The old tax plan let you deduct up to $1 million.

Health care: Say goodbye to that tax penalty you have to pay if you don’t have health insurance. The new tax law repealed the Obamacare individual mandate starting this year – meaning in the future, you won’t have to pay a fee when you file your taxes. Heads up: since the mandate was still in effect in 2018, most people still need to show proof of health insurance when they file their taxes this year, or pay a fine.

SALT: Not just what you put on food. Stands for state and local taxes on property, income, and sales. You can still deduct these kinds of things when you file your taxes. But only up to $10,000. It’s a major blow to people living in states with high taxes (looking at you, NY and CA).

Child tax: For once, the more kids you have, the merrier on your wallet. You can get up to a $2,000 tax credit for each kid that qualifies. That’s twice as much as the last tax plan.

Remind me what happened last year.

You might’ve seen a bump in your paycheck. Most people were expected to get one. Although it looks like many people said they didn’t notice a difference. If you did notice, you have the new tax plan to thank. That’s because it changed the tax brackets – aka how the gov decides how much to tax you based on your salary. So most people don’t have to cough up as much to the gov. But it’s not all rainbows and unicorns.

Paying less in taxes may mess up your withholding – how much your employer takes out from your paycheck for federal taxes. Last year, the IRS issued new guidelines based on the new tax brackets. And has been pushing taxpayers to double check their withholding to make sure they’re not taking out too much or too little. Otherwise you might owe The Man this year, or you could get too big of a refund. If you fall into one of these camps after filing your tax return, check in with your HR manager about adjusting your withholding.

Student loans: Stay in school, kids. If you’re paying off loans, you can still deduct up to $2,500 in interest.

Depends. Supporters say this will help people get more cash in their wallets. Critics say these tax cuts will add a looot of money to the deficit. And even though you’re getting a tax cut now, it might not last.

Times they are a changin’. Now you know what those changes look like so there aren’t any surprises when you sit down to file this year.