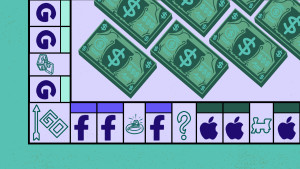 When a corporation starts looking like they're becoming a monopoly, the gov might step in to say 'do not pass go.' Meet: antitrust lawsuits.

Back up. What’s a monopoly?

It's when a biz and the product or service it sells dominates an industry and faces little to no competition. That gives it a lot of power to control prices.

And what are antitrust lawsuits?

Antitrust laws and other regulations (hi, President Joe Biden's recent executive orders) were created to prevent any one business from dominating the market and becoming a monopoly. When it seems like a company could be violating those laws, an antitrust lawsuit may be brought against it.

Any cases I might've heard of?

Maybe the ones against...

How do antitrust lawsuits affect me?

These cases (and appeals) can take years to play out before they make any direct impact on consumers. (And tech companies usually have the upper hand because proving they're violating antitrust laws and harming consumers is hard to do when many of their services are free.) But in general, breaking up monopolies could benefit your budget. Multiple companies within an industry means they have to compete for your business. Which could keep prices (relatively) low. And encourages companies to constantly innovate to have the latest and greatest products available.

What if I invest in companies being sued for antitrust issues?

Again, antitrust lawsuits can last a long time, so no need to panic. But know that while they drag on, they can also drag down a company's stock price. So don't be surprised if there's some volatility when news breaks about the lawsuits. That's a good reminder to diversify your investments, so that no single company or industry (whether it's involved in a lawsuit or not) has too big an impact on your portfolio.

Some say antitrust laws give the gov too much power. Because it's not fair for Uncle Sam to limit winners' success in the market.

And one more thing: sometimes a monopoly can be a good thing that the gov says is okay because it benefits the public. Like when you need a consistent supply of an important commodity. Example: electric utilities.

When a company gets too big and powerful, it can spell bad news for consumers. And lately, Big Tech has been in the hot seat for monopolizing the market. Antitrust lawsuits are one way the gov tries to keep them in check.