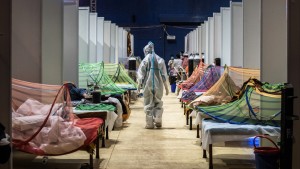 Things in India are going from bad to worse.

Since March, cases have skyrocketed, from under 20,000 daily (out of more than 1 billion people) to over 400,000. And the deaths are believed to be undercounted. By one estimate, the country accounts for more than 40% of all new global infections. The explosion in cases has pushed the country's health care system to collapse. Hospitals have run out of beds. Medical oxygen and ambulances are in short supply. But scientists think much of this could have been avoided.

In early March, a group of five scientists reportedly warned Indian officials that a more contagious variant was on the rise. But the gov didn't listen. Instead, PM Narendra Modi and opposition lawmakers held large political rallies with millions of unmasked supporters. Religious festivals continued without restrictions. And the impact has been devastating: the Indian diaspora – the world's largest – is in mourning. Burial sites are running out of space. Last week, the US called for American citizens to get out. It's not the only action the US is taking.

The admin's imposed a travel ban (effective tomorrow) on most travelers from India, saying it's following the CDC's rec. The move came after Biden and other Democrats criticized former President Trump for his response to the coronavirus when he enacted a travel ban from China last year. But the US is also helping out. Last week, the Biden admin announced it's sending medical aid including 400 oxygen cylinders, about 1 million rapid tests, and supplies to make vaccines. Others have also pitched in to help, including celebrities like Priyanka Chopra Jonas and Jay Shetty.

There's a split screen going on. As vaccinated people in the US are increasingly hugging their friends and families, countless in India are in a state of terror and mourning. They deserve accountability. But more immediately, they need help.

Who's entering an Epic battle…

Apple. Today, the tech giant and "Fortnite" creator Epic Games will face off in court over an antitrust lawsuit. Last year, Apple removed "Fortnite" from its App Store after Epic tried to bypass the store's payment system. The video game creator sued, arguing Apple's taking a big bite of profits by claiming upwards of 30% of all revenue made on iOS apps. And that it's holding a monopoly on apps for over a billion iPhones. Apple's saying 'don't be so sour,' arguing there are plenty of players (hi, Google Play and PlayStation Store) who offer users app or gaming services. Now, a federal judge in Oakland, California, is stepping into the arena. And will likely hear from the company CEOs during the three-week trial.

SpaceX. Yesterday, its Crew Dragon capsule (aka Resilience) carrying four astronauts landed safely in the Gulf of Mexico – the first nighttime landing since 1968. Last November, SpaceX and NASA teamed up for their second mission together and sent the Crew-1 to the International Space Station (ISS). The four astronauts (three Americans and one Japanese) spent six months on the ISS, studying how gravity affects heart tissue, growing radishes as part of a food experiment, and making repairs to the spaceship. Now, SpaceX's Crew Dragon capsule has wrapped up the first operational mission under NASA's Commercial Crew Program. Next up: SpaceX's all-civilian crew flight this September dubbed Inspiration4.

Manchester United and Liverpool. Yesterday, their soccer game was postponed after hundreds of protesters – mostly Man U fans – broke into the stadium. Reminder: Last month, both Premier League teams had signed up to break away and join the new European Super League. But then they quickly said 'nevermind' after FIFA, UEFA (European soccer's governing body), and fans raised red cards. Now, Manchester United fans are calling out the team's American owners (who also own the NFL's Tampa Bay Buccaneers), saying they've put the team into hundreds of millions of dollars of debt since their leveraged takeover of the team in 2005. And want to be able to have more say over the team's future. Officials are investigating the protests that left two officers injured.

The CDC. Early last month, at least 64 people reported "adverse reactions" after receiving the Johnson & Johnson vaccine (different from the blood clots). Think: headaches, difficulty breathing, and nausea. On Friday, the CDC said 'it's probably anxiety,' and that most symptoms were resolved within 15 mins.

Who's riding a Kentucky Derby high...