Why Are World Leaders Talking About a Global Minimum Tax? 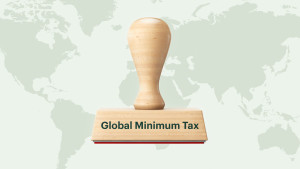 World leaders want businesses to share more of their profits with the gov. Enter: a global minimum tax rate.

It's the lowest possible tax rate a company could owe a gov for doing biz in that country. The current proposal – which G20 leaders agreed on in late October 2021 and could go into effect in 2023 – says the magic number is 15%. The tax would apply to multinational firms with more than about $850 million in annual global sales. They also said 'yay' to tax law changes that would prevent companies from trying to save money by setting up shop in tax-haven countries. While countries around the world could still set a lower tax rate if they want, a company's home gov could "top up" their tax bill to get to the full 15%.

Why is this a big deal?

For decades, companies have been paying less and less in taxes. That's in part because some of the big ones (hi, Facebook, Pfizer, Google, and Amazon) have been able to comparison-shop and base their overseas operations in places that charge less. Think: Ireland, home to the European HQs of many large US pharma and Big Tech companies, where the corporate tax rate is 12.5%.

Experts say this has contributed to declining gov revenues and less money available to fund social spending programs. One estimate says a 15% minimum rate would bring in about $150 billion a year in additional global tax revenue. The Biden admin is crossing its fingers that adds up to about $350 billion for the US alone over the next 10 years.

Who's a fan of the global minimum tax?

Heads of state from some of the world's largest economies, including the US,  Canada, Mexico, China, UK, Russia, and European Union. And 136 countries representing 90% of the world's GDP have given it the thumbs up. That includes long holdouts (and accused tax havens) Estonia and Hungary. And Ireland, which is now on board because of the focus on big businesses and the promise the tax won't go higher than 15%.

Supporters say it's a tiny step forward on President Joe Biden's proposed policies to help fund big economic plans, including on child care and climate change. And it's considered a major win for Treasury Sec Janet Yellen, who's made the fight for a global minimum tax one of her top goals.

Kenya, Nigeria, Pakistan, and Sri Lanka. Some argue that the minimum tax rate punishes poorer countries by shifting taxation from where production happens (often in developing countries) to where headquarters are – which tend to be wealthier nations. That means giving up valuable tax revenue that these countries (and their economies) rely on.

In the past, some Republican leaders and business groups argued that raising corporate taxes would make America less competitive (because corporations will choose to do biz in other countries with lower taxes instead), which could lead to fewer American jobs. That's why supporters say it's crucial for all countries to agree to set the same minimum. But the GOP still isn't thrilled about giving up some tax decision-making powers to foreign countries. Or raising taxes in general.

Does any of this affect me?

There's a school of thought that if corporations are forced to pay higher taxes, they could pass on added cost to consumers in the form of higher prices. But overall, the hope is that making this change will encourage big businesses to stay in their home countries, helping boost local economies through higher tax rev and more jobs.

Agreeing to the plan is just the first step. Now international tax treaties need to be updated, and each country needs to make it law. That could be an uphill battle in the  US, where Congress will need to pass a bill that bumps up the tax rate American companies pay on overseas profits from the current rate of 10.5% to 15%. Dems are planning to add that provision to their mega social spending bill, which they hope to pass via a process known as reconciliation.

The G20's endorsement of a global minimum tax rate is a big step after years of negotiations. Whether it goes into effect is still TBD. Some worry that a minimum tax could harm poorer countries and consumers. But given the overwhelming support from leaders around the world, many believe the pros could outweigh cons.