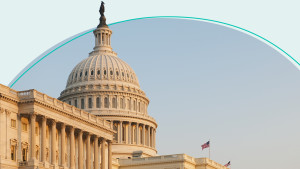 The max amount of money the US can borrow (by issuing bonds) to pay its bills. Increasing the debt ceiling or getting rid of it altogether allows the gov to make good on its existing debt — not spend more in the future.

On August 1, 2021, the ceiling was reset to its current level around $28 trillion. Which led to Uncle Sam using “extraordinary measures" to temporarily cover the bills. Like saying 'not right now' to issuing special Treasuries that typically help state and local govs with their own finances. And replacing regularly scheduled contributions to a federal employee retirement fund with an IOU. But even those back-up measures were starting to run out.

What happens if the money runs out?

Default. Treasury Secretary Janet Yellen said the US running out of money would lead to "widespread economic catastrophe." Think: no Social Security checks, no pay for our troops, no food assistance, and delayed child tax credit payments.

But wait, there's more. Just like you have a credit score, America does, too. That lets the world know that the US is financially strong and can be trusted to repay its debts. Defaulting means it'd take a hit, which could trigger higher interest rates, lower stock prices, and other kinds of economic distress. Including a recession.

That sounds bad. Did Congress increase the debt ceiling ASAP?

Not quite. Because politics. Along with Secretary Yellen and President Joe Biden, Democrats were pro-raising the debt ceiling with bipartisan support. GOP leaders said they'd rather Dems raise the debt ceiling without Republican support. Psst...Congress played a similar game under the Obama administration. Recap: in 2011, the drama led to the US credit rating getting downgraded for the first time in history — even though lawmakers did raise the ceiling just in the nick of time.

So what’s happening with the debt ceiling now?

On October 14, President Joe Biden signed a bill to temporarily increase the debt ceiling by $480 billion — just enough for the gov to pay its bills until December. Then in another eleventh-hour vote before the extended deadline, lawmakers negotiated a one-time procedure change that allowed Senate Dems to pass the legislation with a simple majority. Meaning no Republican Senators would have to support the bill (or give up getting to say they opposed adding to the national debt at midterm election time). So they avoided default and increased the debt ceiling by $2.5 trillion, which should cover the US until 2023. The GOP has warned that they will not let future debt ceiling increases pass as easily.

The US (again) avoided a historic default on its debts…until at least 2023. Next year’s midterm elections could offer a preview of the next debt ceiling debate if Republicans regain control of the House.

Updated on Dec. 7 to reflect the latest debt ceiling deadline

Updated on Dec. 15 to include the new agreement to raise the debt ceiling.