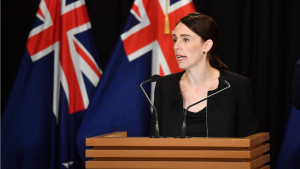 Days after the deadliest shooting in New Zealand's modern history, its government is taking up the issue of gun control.

What's the latest news with the shooting?

50 people were killed and more than 30 are still in the hospital after a gunman opened fire at two mosques in Christchurch, NZ. The death toll could've been higher had it not been for Abdul Aziz, a survivor who ran towards the gunshots and confronted the gunman.

The suspect is a 28-year-old white nationalist from Australia. He allegedly posted an anti-immigrant manifesto online – which was sent to media outlets and the prime minister's office minutes before the attack. He also allegedly live-streamed part of the attack on Facebook (the company said it had removed 1.5 million versions of the video within the first 24 hours). He's been charged with murder and will be tried in New Zealand. He reportedly fired his lawyer and says he plans to represent himself.

And how are the families?

A preliminary list of the victims has been shared with family members, but authorities there are still trying to identify all of the bodies. Some bodies are being released to families, as officials are aware that Islamic practice requires burial as early as possible, usually within 24 hours of death. Here's how you can help the victims and families.

Can this stop, please.

PM Jacinda Ardern says her government will announce new gun laws within the next week. In New Zealand, laws are more strict than in the US. While many Americans can buy a gun in less than an hour after a background check, that process can apparently take weeks or months in New Zealand and includes a home visit from officials to make sure a weapon would be properly stored. But unlike some countries, most guns don't need to be registered there.

So what else could the gov do?

Arden's mentioned that she wants to ban semi-automatic weapons. But the gov may try other options, like creating a gun buyback program, banning private ownership of semi-automatic guns, or requiring more types of guns to be registered. This swift action is showing how different gun culture is in New Zealand than in the US – where Congress hasn't passed gun control legislation after multiple deadly attacks per year.

Anything else I should know about?

Yup. On Friday, an Australian anti-immigration lawmaker made headlines for blaming Muslim immigrants for the attack. Over the weekend, a teenager threw an egg at him while he was talking to reporters. The lawmaker responded by punching the teen. The video of the incident went viral – and people are calling the lawmaker out for getting physical.

One thing this shooting is exposing is the rising trend of white nationalism around the globe. And the deadly violence that can come with it. There's worry that if this suspect gets to represent himself at trial, it could serve as a platform for these types of views.

This report on Saudi Arabia's efforts to silence critics. It says that Crown Prince Mohammed bin Salman (MBS) authorized a secret campaign to crack down on dissidents. Last year, Saudi journalist Jamal Khashoggi – who's criticized the Saudi gov – was killed at Saudi Arabia's consulate in Istanbul. Pretty much everyone pointed the finger at MBS for ordering his killing. The CIA reached the same conclusion. Saudi Arabia couldn't get its story straight, but always maintained that MBS wasn't behind it. Fast forward a few months later, and we're learning about this campaign. It reportedly started more than a year before Khashoggi's death. And there were at least a dozen other missions carried out, like bringing Saudi dissidents back to the country and torturing them. The Saudi Embassy in DC says it takes the allegations "very seriously."

The aftermath from deadly storms around the world. A recent cyclone in Malawi, Mozambique, and Zimbabwe killed at least 150 people. Hundreds are still missing, and tens of thousands are stranded because of damaged roads. Rescue efforts are underway. Meanwhile, in Indonesia, dozens of people were killed because of flash flooding and a landslide. Search and rescue teams are having a hard time reaching some of the affected areas. The Midwest also experienced record flooding over the weekend. A bomb cyclone there brought heavy rain and flooding. At least three people have died as a result, and two others are missing.

What your cousin who's studying abroad is texting about…

Paris. Things turned violent during the 18th straight weekend of yellow vest protests there. They started in November over a proposed fuel tax hike, but have gradually turned into general anti-gov protests. Over the weekend, protesters set off fires, and damaged stores and restaurants. Dozens of people were injured. France's PM and others met up over the weekend to figure out how to handle this violence. Meanwhile, Serbia had its own protests this weekend. Thousands turned out to call for the president to step down. He's been accused of being a dictator with a tight grip on the media. There have been opposition protests going on for more than three months. Over the weekend, thousands took to the streets – and some stormed the national TV station – calling on him to hand in his resignation letter and demanding fair elections and a free media.

Am I in trouble? Fox News reportedly suspended host Jeanine Pirro. Last week, she got in hot water for questioning whether Rep. Ilhan Omar (D-MN) was loyal to the US and the Constitution because of her religion. Reminder: Omar's one of the first Muslim congresswomen ever. Fox News condemned Pirro's comment, and didn't air her show over the weekend. President Trump wasn't too happy about that. He said that the channel should bring back Pirro – who's known for defending him. Here's who's also defending Trump: acting chief of staff Mick Mulvaney. Over the weekend, he said "I don't think anybody could say that the president is anti-Muslim." This comes as some have wondered whether Trump's rhetoric and policies around white supremacy may have played a role in the New Zealand shooting. And why he hasn't directly condemned white nationalism both in the US and abroad.

QB Johnny Manziel is getting back on the field. The former Heisman Trophy winner signed with the Alliance of American Football (the NFL's new, lesser-known cousin).

What to say when your roommate says they're gonna go run…