Daily Skimm: Brexit, Google, and the Return of "Stranger Things" 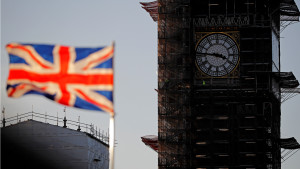 Brexit just went from 'tangled web' to 'buckle up, things are getting messy.'

Last week, UK lawmakers rejected PM Theresa May's Brexit deal for the second time. They also voted in favor of leaving the EU with a deal, and in favor of getting an extension. Which left May scrambling for plan Z. She asked the EU to give the UK some more time to finalize the divorce terms. Yesterday, the European Council president said 'sure, but under one condition.'

Get Posh to join the Spice Girls reunion?

Hmm close. Get UK Parliament to sign off on May's deal. Problem, because the speaker of Parliament said that lawmakers cannot vote for a third time on the same deal. Meaning it's up to May to work the charm offensive to get enough backing from lawmakers and change the speaker's mind. All she has to do is convince people who already said 'nope' to her deal to get on board in the next eight days. Because, oh yeah, if they don't, then Britain is peacing out of the EU without a deal in place – which could be detrimental to the UK, the EU, and the rest of the world. Today, EU leaders will discuss whether to grant a delay until June 30 – something the other 27 EU nations need to sign off on.

One more time for those in the back: the biggest change in decades of British trade and foreign policy could happen in eight days. And there's still no plan in place. Consider this your daily reminder not to procrastinate.

A human rights group alleges the US may have committed war crimes in Somalia.

It would not be, no. For years, the US has carried out drone strikes to take out an al-Qaeda affiliate based there called al-Shabab. The attacks have roughly tripled since President Trump took office, who specifically relaxed rules around these attacks in the country. This new report says at least 14 civilians have been killed and eight have been injured since 2017. And that these attacks may have violated humanitarian law and may amount to war crimes.

Well, according to the US gov, it's also incorrect. The military says it's never killed civilians there. Amnesty International is calling for the US to conduct impartial and thorough investigations of the drone strikes. Unclear if it'll cooperate.

The US has been quietly conducting these types of military operations in Somalia for almost a decade. And drone strike attacks have ramped up since 9/11. The government has long been criticized for the lack of transparency around these attacks. Now, this group is trying to expose apparent details that may have otherwise gone under the radar.

New Zealand. Today, the country's PM Jacinda Ardern announced changes to gun laws there. This comes after last week's deadly shootings at two mosques in Christchurch, where a gunman killed 50 people. The day after, Ardern promised that the gov would make changes to gun laws – and now she's delivering. She says the gov will ban military-style semi-automatic weapons, assault riffles, and high-capacity magazines. And that there'll also be a buyback program for people who want to give up their guns. The gov's expected to introduce legislation next month.

Skimm More: Read up on gun policy in New Zealand and the US.

What to say when you win a bet…

Hand over the money. Yesterday, the EU hit Google with another antitrust fine. According to the EU, Google used exclusivity clauses in contracts with certain websites so only its ads could appear. Meaning rivals' ads couldn't compete. Now the EU's asking Google to write a $1.7 billion check – that's on top of the $5 billion and $2.7 billion fines it had already slapped on in the past two years. Speaking of companies looking at legal papers: Disney. Yesterday, it closed its acquisition of 21st Century Fox – after it won the dog-fight-slash-bidding-war against Comcast last year. The move is likely going to shake up the media landscape and puts Disney as a player in the streaming service game. Netflix, ya hear? Speaking of things with money on the brain, the Federal Reserve looked into its crystal ball and isn't seeingany interest rate hikes for this year. It says that while the job market is still strong, economic growth has slowed. We can't all be making money moves.

Skimm More: Our daily podcast "Skimm This" went deep on how the EU wants big tech companies to play nice with competition. Listen up.

This lawsuit against Harvard University. It centers around pictures of an enslaved man and his daughter that a Harvard professor commissioned in 1850. The professor used the images to push the racist belief that black people were inferior to white people – and to allegedly justify slavery and segregation. Now, a woman who says she is a descendant of the man in the photos alleges that Harvard has been profiting off of the pictures because of licensing fees. She wants the photos turned over to her family – and for the university to pay up.

What to say after your roommate gets groceries…

Perhaps wash your produce. Twice. About 70% of fresh produce sold around the US apparently has pesticide residues…even after it's washed. Don't gag, stay with us. A health advocacy group found that strawberries, spinach, and kale have some of the highest levels of residue, while avocados, sweetcorn, and pineapples had the lowest. Not to be a Debbie Downer, but we have more tea to spill. Literally. A new study says drinking very hot tea can increase the risk for esophageal cancer. Drinking tea itself isn't dangerous, just the temp it's in. So, maybe let it cool down while you make that avocado toast.

What to say when you're dreaming of 1969 Hollywood…

What to say when you hear Jessica Simpson just had a baby girl...

Power to the women.