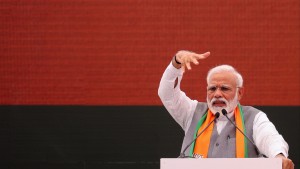 It is. 900 million people are eligible to vote. More than 8,000 candidates are running for Parliament. Whichever party gets the most votes chooses the prime minister. The current PM is Narendra Modi. And this election is being seen as a referendum on his five years in office.

He came to power when his Hindu nationalist party overwhelmingly won in 2014 – the biggest single-party majority in decades. Back then, Modi's campaign was focused on improving the economy. This time around, it's about keeping India safe.

Rahul Gandhi, leader of the opposition party. No, he's not related to that Gandhi – though his family tree could give "Game of Thrones" a run for its money. (His great-grandfather was the country's first PM, and his grandmother was its first female PM.) The opposition isn't expected to win, but it's putting up a fight.

Got it. So what are the issues at play here?

Kashmir…the disputed region that both India and Pakistan control parts of. There was a flare-up earlier this year that many were worried could escalate – especially since the two sides are both nuclear-armed countries. Modi has used the recent tension as an opportunity to spur nationalist sentiment.

Corruption...Gandhi's party had been accused of various scandals for years. And many have praised Modi for cracking down on corruption when he came to power. But many take issue with how he's handled...

The economy…even though India has one of the fastest-growing economies in the world, the unemployment rate is growing. Farmers have especially been struggling. The opposition's pitch: create more jobs and give poor farmers and families an assist through subsidies.

Division…between upper and lower castes as well as between Muslims and Hindus. Modi's party has a lot of backing from India's upper castes, and is perceived to have alienated lower castes and Muslims. In the past few years, there's been increasing concern over violence by extremist Hindus against Muslims. Modi and the opposition party have condemned it.

But to backtrack, you said the election starts today. When does it end?

In May. There are seven voting phases over a six-week period (and we thought our election cycle was long). There'll be about 1 million polling stations around the country.

India is home to close to one-fifth of the world's population. And even though it's not one of the wealthiest countries, it plays a role in everything from nuclear security to climate change. So the whole world has a stake in what goes down.

Dear lord, will it never end? Looking at you, Brexit. Just when you thought it couldn't become more of a never-ending mess, meet Brextension. Yesterday, the EU agreed to delay its breakup with the UK until the end of October – technically Halloween. (Because nothing's spookier than a breakup that just will not end.) UK Prime Minister Theresa May is relieved, since it means the UK won't crash out of the EU this Friday without a deal– which could have meant chaos with trade and at airports. But she's also hoping she can wrap things up earlier than that, ideally by May 22 so the UK doesn't need to participate in the EU's parliament elections. So no, the Brexit talk wasn't over, it still isn't over. Gotta get up, gotta get out...

Historic. So is this: Gov sources say that Sudan's President Omar al-Bashir has stepped down. al-Bashir has been in power for 30 years and faces charges by an international court for genocide in Darfur. In December, people in Sudan began protesting food shortages and price hikes – which turned into calls for al-Bashir to pack his bags. Those protests have escalated in recent days, with thousands sitting in at the president's residence. At least 22 people have reportedly been killed since Saturday. Today, reports started coming out that the military forced al-Bashir out and state TV teased an announcement coming soon. But protest leaders say they'll keep demonstrating until there's a civilian transitional gov in place. Meanwhile in Algeria...last week, its president stepped down after weeks of protests. Now, the interim president (an ally of the guy who got ousted) promises to hold a new election on July 4. These movements have many wondering if we're witnessing an Arab Spring 2.0.

What to say when you hear the House's net neutrality bill is probably DOA in the Senate...

Meet, the executive order. Yesterday, President Trump signed two of them to make it easier to free up pipelines for US oil and gas. This could make it easier for US customers to get more affordable oil and gas. But critics are concerned about the environment, and how opening up pipelines could mess with clean water. Speaking of things affecting the environment, Amazon. Earlier this year, the company said it's working to shrink its carbon footprint with things like reusable packaging. But didn't give a ton of details. Now, thousands of Amazon employees have signed an open letter saying 'how about those details?' And is calling on the company to stop working with oil and gas companies. It's the tech industry's largest-ever employer-driven move to combat climate change.

Brexit is also keeping us on the edge of our seats. Yes, the same Brexit you've been hearing about non-stop for months. Last week, UK PM Theresa May asked the EU for an extension until June 30 to figure out how exactly Brexit would happen. Today, EU leaders are meeting for an emergency summit to decide whether to give the UK more time. But European Council President Donald Tusk is feeling like Oprah and wants to give the UK a one-year extension. You get an extension, and you get an extension. He says that it's unlikely the UK will have its sh*t together by June and this would give the UK more time to "rethink its Brexit strategy." It's unclear if the other kids on the bloc will back his deal, but every EU nation has to agree on any new timeline. And if that doesn't happen by Friday, Brexit's going down without a deal in place, which will cause all sorts of chaos. Brilliant.

What to say when you're not over the first-ever image of a black hole...

Also going down the rabbit hole on this new human species. Thanks, science.

What to say when Netflix is putting things down in writing...

The National Enquirer is putting up a 'for sale' sign.

What to say when you keep making the same mistakes…

It's the circle of life.