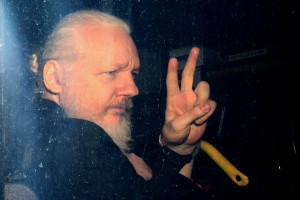 Assange...the one played by Benedict Cumberbatch?

Yes, if we must. His organization has published secret government documents for years. Some call it a push for transparency. He calls it journalism. The US calls leaking documents to him espionage. Ex-US Army intelligence analyst Chelsea Manning learned that the hard way.

In 2010, she sent WikiLeaks hundreds of thousands of confidential documents on things like abuse of detainees and the killings of journalists and civilians in Iraq. It was the largest leak of classified data in US history. She was sentenced to 35 years in prison for violating the Espionage Act and other charges – but President Obama commuted her sentence after seven years. Meanwhile, Assange was trying to avoid getting extradited to Sweden.

This was over allegations of sexual assault and rape from two women. In 2010, he left the country for the UK in the midst of the investigation. Sweden ultimately issued an international arrest warrant for him. Assange denies any guilt. And although Sweden later rescinded the warrant, the case against him is not closed. Anyway, this all led to Assange getting arrested in the UK, skipping bail in 2012, and ultimately getting political asylum from Ecuador.

Why did Ecuador grant him asylum?

Apparently to stick it to the United States, which its leader saw as overstepping in Latin American politics. Ever since, he's been hiding out in the country's embassy there. Meanwhile, WikiLeaks has continued to release damaging documents, including the 2016 DNC email drop – a leak that US investigators say came from Russian hackers.

Let's go with that. As you can imagine, it's put a strain on Ecuador's relations with the US and UK. Yesterday, Ecuador withdrew Assange's asylum, calling him a "spoiled brat" and accusing him of meddling in foreign affairs. It also seems Assange lacked basic roommate skills like keeping his space clean and taking care of his own cat. He was arrested, dragged out of the embassy, and was already found guilty by a UK judge of fleeing bail all those years ago. Now, if he's extradited to the US, he faces a charge of conspiring with Manning to hack a US government computer. And could spend up to five years in prison.

The issue of Julian Assange and WikiLeaks is seen by some as an issue of national security versus press freedoms. And the US gov was careful in not charging him under the First Amendment, potentially to avoid having to challenge those freedoms. Though even after years of evading charges, it's still unclear if or when Assange will face the US justice system.

Skimm More: Go deeper on Assange with our latest "Skimm This" podcast episode.

Former White House lawyer Greg Craig is being charged with misleading the feds about his work as a foreign lobbyist.

That sounds bad. But also his name is Greg...Craig?

Yup, take a moment if you need it. You good? Here's what happened: in 2012, after working for President Obama, Ukraine's pro-Russian government hired his law firm to write a report on how it was totally fine and normal for it to arrest a famous political rival. You with us?

Barely. Why are we talking about this?

Because even though the report was framed as an independent review, it was considered lobbying (and whitewashing) on behalf of the pro-Russian gov. Craig allegedly didn't flag to the US gov that he was working as a foreign lobbyist. And downplayed all this when the feds interviewed him about it at the time. But then special counsel Robert Mueller kicked off his Russia investigation.

Yup. When he found out about similar lobbying crimes by former Trump campaign chairman Paul Manafort, the issue of Craig's alleged lobbying resurfaced. The feds interviewed him again. And he allegedly lied. Again. So Mueller referred the investigation to other prosecutors. Now Craig is being indicted on two counts. His lawyers say he's not guilty. And that prosecutors are going overboard on this one.

So, not a good day for guys and the law.

No, but also...haaaave you met Michael Avenatti? He's the lawyer known for repping Stormy Daniels, and was once a potential 2020 candidate. Yesterday, he was charged with another 36 counts for things like tax and bank fraud. He could face up to 335 years in prison. Yes, 335.

There's still a lot we don't know about the Mueller report. But the Craig indictment is a reminder of how many people have been swept up in charges unrelated to the original intent: to determine whether President Trump or his campaign colluded with Russia.

Sudan. Yesterday, President Omar al-Bashir left office the same way he came into it: with a military coup. Under his 30-year authoritarian rule, he was accused of leading a genocide in Darfur that killed hundreds of thosuands of people. And of brutally suppressing dissent. The US has also put his gov on the list of state sponsors of terrorism. But late last year, people started protesting food shortages and rising prices, which quickly turned into anti-gov protests. Yesterday, the military said it arrested al-Bashir. And that it will take over for two years before there are elections. It also suspended the constitution, dissolved the government, and set a 10pm curfew. Protesters are glad al-Bashir is gone, but they want a civilian gov instead of a military one – and say they'll continue protesting until that happens.

Stop listening to me, please. A new report says behind every Alexa is a team of people at Amazon listening to your conversations – whether you're talking to it or not. Workers around the world who've signed NDAs about this program transcribe certain conversations. The goal: help Alexa's algorithms better understand and respond to commands. Amazon says that this information is highly confidential and that employers can't identify users by their conversations. It's the first we're hearing from the company that real people listen to us – but it's not the only home device that's done it. Hi, "Black Mirror," is that you?

But will space change things? After astronaut Scott Kelly spent a year in space, NASA studied the difference between his body and his identical twin brother's back on Earth. Now we're learning that some of Scott's genes changed while he was up there. And although most returned to normal when he got back, his body showed signs of stress. And changes to his immune system seemed to last for months. Good to know for when we're all living on Mars in 100 years.

What to say when you hear who's playing Elizabeth Holmes next…

A girl has no name. Oh and once you're done with winter, take a trip over to Guava Island.