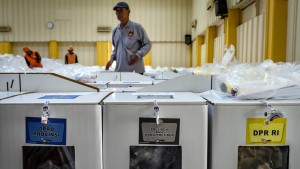 Indonesia is having flashbacks.

The world’s fourth-largest country is headed to the polls today – and the race for president is a rematch between the candidates who faced off in 2014.

Oh ok. Who are they?

President Joko “Jokowi” Widodo and ex-military commander Prabowo Subianto. Widodo’s a former furniture salesman and political outsider who grew up in the slums. He was first elected in 2014 on a promise of hope and change, reminding people of former President Obama.

Did he live up to that?

Depends who you ask. He’s expanded health care for the poor and built up infrastructure. But he’s been criticized for not cracking down hard enough on corruption. And many are frustrated over the economy as well as ongoing human rights abuses there against non-Muslims and LGBT people. He’s been smeared as a communist and not sufficiently Muslim. That may be why he chose a hardline Muslim cleric as his running mate. His more progressive supporters aren’t fans of the VP pick.

Got it. Tell me about the other guy.

Subianto’s former father-in-law was a dictator who was ousted in 1998. And despite his elite background, he’s now pitching himself as a populist, religious conservative – reminding people of President Trump. Subianto’s campaign focused on fixing the economy and appealing to nationalist sentiment. He was once kicked out of the military over human rights abuses. And some are concerned about his ties to Islamist groups as well as his potential for rolling back democratic reforms.

Early results show that Widodo has the lead, but it’s unclear if it’ll wind up being a close race in the end. Subianto lost by only six points in 2014. Official results aren’t expected until May.

Authoritarian rule is on the rise in Southeast Asia (see: Vietnam, Cambodia). But Indonesia is holding strong as the third-largest democracy in the world. And this election is no small task. There are 193 million eligible voters on more than 17,000 islands that make up the country – and it’s the first time presidential and parliamentary elections are happening there simultaneously.

Always. President Abdel-Fattah el-Sissi is the authoritarian leader who’s been in power since 2014, after leading a military coup that ousted Mohammed Morsi. Yesterday, lawmakers there signed off on changes to the country’s constitution that would extend presidential terms to six years, and could let him stay in power until 2030. It would also let him appoint judges and the public prosecutor, and give the military more power over civilians.

Why all the change?

Supporters say it’s to give him more time in office to complete long-term agenda items (think: development projects and economic reform). But critics say it’s just a ploy to make it easier for Sissi – whose government has arrested thousands of critics – to crack down on dissent.

Not yet. The vote goes to a referendum that could start next week. But…don’t expect this to be a fair vote.

The latest move seems to show Egypt trending from authoritarian to more authoritarian. Compare that to how nearby countries like Algeria and Sudan have dealt with their own authoritarian rulers in recent weeks (read: massive protests that have led to leadership turnover).

What to say when you face a setback…

Can’t bring me down. That’s what French President Emmanuel Macron is saying about the Notre Dame fire. Officials are still investigating the cause of this week’s fire that destroyed the cathedral’s spire and rooftop. And though treasured pieces like the rose windows and the organ were saved, there are a few artifacts we still don’t know about. Officials are also still working to assess the extent of water damage and whether the building’s structure is stable. But Macron is saying ‘don’t lose hope.’ And that he plans to have the iconic cathedral restored within the next five years. France’s billionaires are putting down the cash to try to make that happen.

Also on the Trump admin’s mind: immigration. Yesterday, AG William Barr issued an order that could keep some asylum seekers detained indefinitely by not letting them post bail. The rule already applies to asylum seekers who cross at legal points of entry even if they show a “credible fear” of being persecuted back home: if they’re above 18 and not traveling with kids, they can’t be released on bail while their cases play out in court (which can take months or years). Now, Barr is extending the same rule to similar people who cross into the US illegally, which could affect thousands of migrants at the border. In case you missed it, resources at the Department of Homeland Security are strained these days (think: not enough detention beds). But the Trump admin has made stemming the flow of migration at the border a top priority. So Barr is giving the agency 90 days to figure out a way to expand its capacity to hold people. The move is expected to face lawsuits.

What people are ringing the alarm about…

Climate change. Hundreds of climate change protesters were arrested in London this week for blocking major streets. You might remember the UN’s many warnings about the catastrophic risks of climate change if we don’t act ASAP. The UK’s hoping to seriously cut carbon emissions by 2050, but even that’s considered ambitious. Now, a protest group called Extinction Rebellion is saying ‘how about zero emissions by 2025?’ And wants the UK to create a citizens’ assemblyresponsible for fighting climate change, instead of leaving this up to parliament. They plan to expand protests to dozens of cities across the world in the next few days.

$: What’s money got to do with it? Here’s how climate change can affect your wallet.

What to say when your friend has an interview…

Suit up. Today, the Trump administration is expected to announce that US citizens can sue over confiscated property in Cuba. Properties were seized from Americans in Cuba after Fidel Castro took over in the ’50s. Years later, Congress passed a law to allow Americans to sue people and businesses that profited off their confiscated property. But for more than 20 years, presidents have suspended that law to avoid increasing tensions with Cuba and allies like the EU and Canada, whose businesses in Cuba could be impacted. Now, President Trump is planning to hit reverse on that policy – the latest in tough moves against Cuba. And a new way for the US to put pressure on countries’ support for Venezuela’s socialist leader Nicolás Maduro. Speaking of, he finally agreed to accept humanitarian aid to help address Venezuela’s high rates of malnutrition and disease. And in other countries on the US’s radar: Iran. As retaliation for the US designating Iran’s IRGC as a terror organization, lawmakers there apparently decided to hit back and label US military members in the Middle East as terrorists.

What to say when there’s unnecessary drama at work…