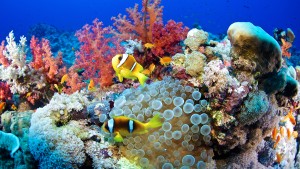 Humans are on track to wipe out 1 million of the Earth's species.

Whoa. I didn't think it was that bad.

Yep. We knew modern civilization was taking a toll on the planet. But not to this extent. Yesterday, the UN dropped a report after hundreds of researchers reviewed about 15,000 scientific and government reports. A quarter of all of Earth's plant and animal species are facing extinction. And some could disappear within decades.

I get that humans are probably to blame...but also, how exactly are humans to blame.

Economic development…We've now severely impacted 75% of Earth's land by doing things like turning forests into farms and building cities to house the world's population – which more than doubled within the past 50 years.

Overfishing...A third of fish are being harvested at unsustainable levels. And almost a third of sharks and fish apparently now face extinction.

Climate change...You knew this was coming. Almost half of land mammals and a quarter of threatened birds may be struggling due to climate change. If the world warms another 0.5-1 degree Celsius (which, reminder: we're on track to do all that and more), 70-99% of all coral reefs might become endangered. Problem, because these reefs aren't just good for tourism, they also support local fish populations.

We're not done yet...Add to that the use of pesticides and the rise in plastic pollution and apparently you've got more ways that habitats could get destroyed. And it's kind of hard for species to survive if they no longer have a habitat.

Okay great, then you care. But in case you don't, consider this: hundreds of domesticated breeds of mammals that humans rely on for food have already disappeared. And this could turn into an economic and security issue as countries compete for increasingly scarce resources.

Last year, the UN released a few climate-related reports that politicians and activists have used as a rallying cry for change. The UN's hoping this latest report will also get countries to take more serious action on these issues. And says that it's "not too late to make a difference, but only if we start now." Challenge accepted.

Skimm This: Our podcast went deep on why biodiversity matters.

Wa Lone and Kyaw Soe Oo. Earlier today, the two Reuters journalists jailed in Myanmar were released from prison after spending more than 500 days behind bars. The journalists were covering the Rohingya crisis there – the military crackdown on a Muslim minority group that's left thousands dead and forced hundreds of thousands to flee. Last year, a judge sentenced them to seven years in prison for illegally possessing top-secret documents. And just last month, Myanmar's Supreme Court rejected the journalists' final appeal. Now, they have been released as part of the president's blanket pardon for thousands of prisoners. As he walked out, Wa Lone thanked people who had been calling for their release and said "I can't wait to go to my newsroom."

Iran. Yesterday, the US confirmed it's sending an aircraft carrier and bombers to the Persian Gulf because of threats made by Iran against US troops in Iraq, Syria, and at sea. The move comes days after national security adviser John Bolton told Iran that the US would meet any attack on itself or its allies with "unrelenting force."

Turkey. Yesterday, the country's election board ordered a revote for Istanbul's mayoral race. Earlier this year, President Erdoğan's Islamist party narrowly lost control of Istanbul in local elections. Considering that Istanbul is Turkey's economic capital and largest city, his party didn't take it well. It challenged the results, arguing there were voting irregularities.

Who's saying 'if I could just jump in for a moment'...

Former prosecutors. In a statement yesterday, more than 500 former government employees – who served under presidents from both parties – said special counsel Robert Mueller's findings would have resulted in obstruction charges against President Trump if he were not president. ICYMI, the Justice Department has a policy that sitting presidents shouldn't be indicted. Mueller didn't say he would've indicted Trump if not for that policy...but he also didn't not say that. Those who signed the statement didn't address what, if anything, they think should happen next.

Treasury Secretary Steven Mnuchin. Yesterday, he rejected House Democrats' request to turn over Trump's tax returns. Mnuchin says that after talking things out with the DOJ, he has determined that the request "lacks a legitimate legislative purpose." Expect this issue to make its way to the courts.

...Oh and speaking of all of Trump's men, Michael Cohen reported to prison yesterday.

What has people looking forward to the future...

Microsoft. Yesterday, it unveiled a new tool it says will make voting secure, accessible, and efficient. Meet: ElectionGuard. This open-source tech can encrypt ballots and would let voters track their vote. It will be available starting this summer...and Microsoft hopes to pilot early prototypes of the tech during the 2020 US elections.

When you hear Amy Schumer is officially a mom...

See you at camp.

When you want to support your friend who's fasting during Ramadan…

Skimm This. Our daily podcast has the scoop on an NBA player who's headed to the playoffs and doing the same. It's also got all the news you need to know, every day at 5pm ET.