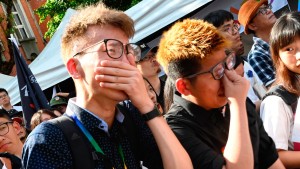 Well then. Let's hear it.

Yesterday, he announced he wants to move the US from a family-based immigration system toward a merit-based one.

What does that mean in practice?

It's a plan that preferences high-skilled workers. If it passes, the US would hand out the same number of green cards it does now – about a million per year. But the proportion would change.

Right now roughly 12% of green cards are granted based on employment and skills. Trump wants to bump that figure up to 57%. And factor in age, ability to speak English, educational background, and whether a US job offer is on the table. He says this will help the US economy by letting "the best and brightest" come to the US. And says that current policies "discriminate against genius."

I'm no math major, but I'm assuming that affects the other percentages?

You haven't mentioned DACA yet.

Neither does this plan. The Trump admin says Congress can't seem to agree on what to do with DACA, so it's tabling the discussion.

What does this mean for the border?

Trump called for stricter regulations around asylum cases. And for more money to build physical barriers.

I feel like I'm ending a meeting by asking this, but what are next steps?

Republicans haven't endorsed Trump's plan yet. And Democrats are already criticizing it. In short, there's no clear path through Congress. But Trump has already said he's not concerned and will push it through after next year's election if he has to.

Taiwan. Today, it became the first place in Asia to legalize same-sex marriage. The island is already considered a haven for members of the LGBTQ+ community, hosting the largest annual pride event in the region. Two years ago, its top court ruled that same-sex couples have the right to marry – and gave the gov until later this month to make it happen. But last year, voters pushed back against the ruling in a referendum – revealing deep divisions in the society. For months it was unclear what lawmakers would do. But with a week left until the deadline, the gov – led by pro-LGBTQ+ President Tsai Ing-wen – managed to pass the law. Tens of thousands of people stood in the rain outside the parliament waiting for it to pass...many holding rainbow signs.

The College Board. Yesterday, it announced it will soon include an "adversity score" for students taking the SATs. The score would take into account 15 environmental factors like family income, local poverty and crime rate, and whether AP classes are available at the school. The idea: that these factors could help provide context beyond just an SAT test score. Race isn't factored into it. Last year, 50 colleges used the score as a test. In the fall, 150 will use it, with more expected in 2020. But it could face backlash from upper-class families and students who worry this score could be used against them.

Whose interest in talking ranges from none to zero…

Chelsea Manning. Yesterday, the former Army intelligence analyst was sent to jail. Again. Back in 2010, Manning leaked a lot of classified docs to WikiLeaks. She served seven years in prison before then-President Barack Obama commuted the rest of her 35-year sentence. Earlier this year, she refused to testify before a grand jury investigating WikiLeaks but was released last week when that grand jury's term expired. Basically, the same thing is happening again. She was served another subpoena to appear before a new grand jury. Yesterday, Manning told a judge she'd rather "starve to death" than cooperate. So she's being sent back to jail – either until she agrees to testify or until the grand jury's term expires in 18 months.

Who's being held accountable…

Purdue Pharma. Yesterday, five states announced they're taking legal action against the company behind the painkiller OxyContin. They're accusing Purdue Pharma of encouraging doctors to prescribe the drug to patients, and downplaying risks. Now, OxyContin is associated with the opioid crisis. And at least 45 states are telling the company to lawyer up.

PG&E. Earlier this week, California officials said that the utility's equipment caused last year's Camp Fire – the deadliest in the state's history. It killed 85 people and destroyed nearly 19,000 homes. Earlier this year, PG&E had to file for bankruptcy protection because of liabilities it faced from wildfires. It admitted that its equipment was probably responsible. Now, a state investigation is saying 'it's true.' And that PG&E transmission lines started the deadly fire.

Who's not afraid of getting into a crowded elevator…

What to say when your office is torn over "Game of Thrones" coming to an end...

Do you want a re-do?

When you need a caffeine fix…

Skimm This. Aka our daily podcast brewed some interesting facts on a chart-topping cup of rare java. Listen up to get your Friday fix.