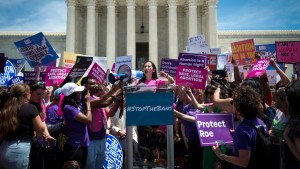 Yesterday, hundreds of abortion ban protests took place across the US.

I feel like everyone’s been talking about abortion recently.

That’s because this year, eight states have passed restrictions…and it’s only May. Arkansas and Utah are limiting the procedure to the middle of the second trimester (around 18 weeks). Georgia, Missouri, Ohio and others are hoping to implement so-called ‘heartbeat’ bills, which would ban abortions when a fetal heartbeat is detected. This happens after about six to eight weeks, before many women even realize they’re pregnant. And then there’s Alabama.

Last week, it made nearly all abortions a felony. Doctors who perform them could face up to 99 years in prison. There are exceptions for when a woman’s health is in serious danger – but not for victims of rape or incest. Worth mentioning: it’s possible that none of these bans will go into effect.

Many were passed knowing that there would be legal challenges. The goal: to get the case in front of the Supreme Court, where a new, solidly conservative majority could overturn Roe v Wade – which says abortion is legal until a fetus is viable outside the womb (usually around 24-28 weeks).

Got it. So tell me about these protests.

Yesterday, thousands reportedly turned out at more than 400 #StopTheBans protests across the country. That included a rally outside the Supreme Court that several 2020 Democratic presidential candidates showed up at. Sen. Kirsten Gillibrand (D-NY) told the crowd “this is the beginning of President Trump’s war on women.”

Speaking of, what does Trump have to say about all of this?

He says he’s “strongly pro-life” but supports abortion access in cases of rape, incest, or when the life of the mother is at risk. Since he said this over the weekend, some saw his statement as pushback against the recent Alabama law.

There’s a lot to process here.

Well, that’s not all. Yesterday, two dozen states and municipalities sued the federal government to stop a new rule that would protect doctors, nurses, and other healthcare workers from having to provide abortions, among other services. The goal is to make it easier for people to deny care if it goes against their religious or moral beliefs. But the lawsuit argues that the rule puts the needs of healthcare workers over patients. It’s scheduled to take effect in July – though it could get caught up in the courts.

In 1973, the Supreme Court ruled that a woman’s right to an abortion was protected under the implied constitutional right to privacy. But pro-life advocates have been hoping for a chance to overturn the decision for decades. People on both sides of the issue are ensuring their voices are heard – and will have another chance to do so in 2020.

Skimm More: Sen. Kirsten Gillibrand sat down with us and told us how she feels about the abortion bans.

Who has their crisis management team on speed dial…

UK PM Theresa May. It’s been a minute, but Brexit is back. This year, lawmakers voted down her deal to leave the EU not once, not twice, but three times. The breakup was supposed to happen back in March, but it got pushed off until October 31 (because nothing’s scarier than the snooze button going off yet again). Yesterday, May said that she wants lawmakers to vote on her plan for a fourth time. And that if they pass it, she promises to hold a vote in Parliament on whether to hold a second Brexit referendum – which many have called for.

$: What’s money got to do with it? Here’s what Brexit could mean for your wallet.

Who might be making a visit to Capitol Hill soon…

Hope Hicks and Annie Donaldson. Yesterday, the House Judiciary Committee issued them subpoenas to testify later this month. Hicks: the former White House communications director. Donaldson: former White House counsel Don McGahn’s chief of staff. House Democrats had subpoenaed McGahn to testify yesterday – but he didn’t show. And if you’re wondering why the committee’s interested in Donaldson, it’s because her detailed notes are mentioned multiple times in special counsel Robert Mueller’s report. Now, the House committee – which is investigating things like potential obstruction of justice – wants Hicks and Donaldson to turn over documents and answer some questions.

McDonald’s. More than two dozen employees are suing the company, saying they were sexually harassed on the job. Sexual harassment isn’t confined to the restaurant industry, but it’s especially pervasive there. One study found 40% of women in the fast food industry experience it. Now, employees at one of the world’s largest fast food chains – some as young as 16 at the time – say they experienced everything from inappropriate comments to indecent exposure and propositions for sex. They’re being represented by several groups, including Time’s Up Legal Defense Fund.

NASA. Last week, it announced it’s teaming up with 11 companies to get humans back to the moon by 2024. This comes months after VP Mike Pence said it’s time for the agency to return to the moon ASAP. The companies include Elon Musk’s SpaceX and Jeff Bezos’ Blue Origin. They’re being tasked with studying new tech and coming up with prototypes that can carry astronauts to the surface of the moon. You know, as one does.

When you want to know the ABCs on CBD…

Skimm This. Our daily podcast breaks down a new study about CBD. Not only does it help you chill out, we explain how it can also help with opioid addiction. Listen up.

When you hear New Coke is making a comeback…