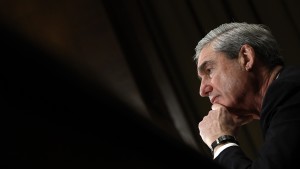 After two years as special counsel, Robert Mueller is speaking out publicly for the first time.

I have to ask...did he sound at all like Robert De Niro?

No. Mueller didn't give much new info, but seemed to want to clear up any confusion around the more than 400-page report his office put together on the Trump-Russia investigation.

First off, give me a 10 second recap of what the report said.

That Russia interfered with the 2016 presidential election. That the Trump campaign had contacts with Russia, but there wasn't evidence that they conspired or coordinated to take the White House. That Mueller looked into 10 instances to figure out whether President Trump obstructed justice but didn't reach a conclusion on that.

So what was the confusion?

Well a lot of the report was redacted because of things like ongoing investigations. And Mueller wasn't impressed with AG William Barr's summary of the report.

That if his team could have cleared Trump of a crime, it would have. That while DOJ policy means he couldn't charge a sitting president, the Constitution clears the way for Congress to tackle that issue. That if lawmakers want him to testify, he won't have anything else to say beyond what's in his report. Oh and that he's closing up the special counsel's shop and going back to life as a private citizen.

Back in the hands of Congress. But this time with a little more ammo. Many believe his comments indicate that it's time to start the impeachment process.

How would that work again?

The House votes on articles of impeachment. Then it's up to the Senate to hold a trial. If that sounds unlikely to happen in a divided Congress, it's because it's unlikely to happen in a divided Congress. Many Dems are calling for it to happen anyway. House Speaker Nancy Pelosi (D-CA) has been trying to walk them back from the ledge, but thanked Mueller for "a record for future action" against Trump.

What does Trump have to say about all this?

The case is closed. Thank you. Literally, he tweeted that.

For years, Mueller has been in the middle of the fight between Trump and Democrats who want the president permanently OOO. And Mueller's exit speech is only adding more fuel to the fire. Now, Dems are feeling the pressure to decide whether impeachment proceedings should be part of their 2020 campaign.

Skimm This: Our daily podcast unpacks the details of Mueller's statement. Listen here.

Who's having a more dramatic week than you…

Israeli PM Benjamin Netanyahu. He won a historic fifth term (fourth consecutive) in last month's elections – despite facing multiple corruption allegations. To actually govern, he had to form a coalition gov. The deadline for that was midnight last night. But two of his potential allies for a right-wing coalition didn't agree on some legislation and refused to compromise. And since Netanyahu wasn't willing to give someone else a chance to form a coalition, parliament voted to dissolve itself. This is the first time in the country's history that a general election failed to produce a government. Now, the country will head back to the polls for a second time this year in September.

Louisiana. Yesterday, the state's House of Representatives voted to ban abortions once a fetal heartbeat has been detected – which can be as early as six weeks, before many women even realize they're pregnant. It's the latest of several states this year to pass abortion restrictions with the goal of getting the issue to the Supreme Court to challenge Roe v Wade. The Louisiana bill doesn't include an exception for victims of rape or incest. Democratic Gov. John Bel Edwards supports the ban and plans to break with his party to sign it.

...Oh and speaking of things states are taking on, Maine banned gay conversion therapy on minors.

Boris Johnson. Yesterday, he was ordered to appear in court to face accusations that he lied to the public while in office. In the lead up to the 2016 Brexit referendum, Johnson – who was London's mayor at the time – repeatedly made the false claim that the UK paid more than $440 million each week to be in the EU. The figure was featured in a pro-Brexit campaign, which promised to invest that cash money into the nation's health service if the UK voted to leave the bloc. Now, a private prosecutor says Johnson abused the public's trust while holding official posts by lying about the numbers – and has raised around $300,000 to get the case going. And he's not looking to stop Brexit from happening: he's concerned with politicians lying to the public, saying that "when politicians lie, democracy dies." Now, a court is saying Johnson has to face the music.

Who's bringing new ideas to the table…

The DNC. It's changing up who can participate in its third and fourth primary debates. In case you've been living under a rock, there are 24 (yes, 24) Democratic candidates running for the party's nomination. To get a spot on the first two debate stages in June and July, candidates need to have a certain amount of donors or support in the polls. But officials say candidates who are still in the race by the third debate (in September) should be able to reach higher thresholds. So the DNC is doubling the donor and poll support requirements – and candidates have to reach both those numbers.

Uber. Earlier this week, the ride-hailing company said that riders who have "significantly below average" ratings may lose access to the app. This announcement came days after a Lyft passenger was caught on camera attacking a driver. It's unclear what "significantly below average" means number wise, but Uber says it will give riders a number of chances to up their ratings before they're kicked out for good.

Bond interest rates are going down. Don't fall asleep. This might not be great news for your wallet and here's why.

When you stop and smell the roses…

Skimm This. Our daily podcast digs deep on why the Philippines wants you to smell the trees. The country's thinking about requiring students to plant trees in order to graduate. From anything: we're talking elementary school all the way through college.