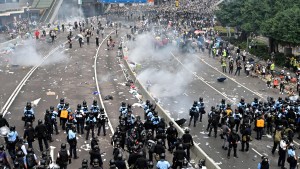 Today, police in Hong Kong fired tear gas into a crowd of tens of thousands of protesters.

What is going on?

This is about a bill that would allow the government to extradite suspects to China. Reminder: Hong Kong has a unique status from mainland China. In 1997, the former British colony was handed back to China – but the deal was that Hong Kong would get autonomy (think: its own laws, justice system, and economy) for 50 years.

It expires in 2047, at which point Hong Kong will be fully part of China. In the meantime, China's been accused of hacking away at Hong Kong's independence. And now there's this bill.

A proposed bill in Hong Kong would allow it to extradite some criminal suspects to China and Taiwan. Supporters want the bill in order to send a Hong Kong man to Taiwan to face charges over the murder of his girlfriend.

And the critics say…

That this will make it easier for China to get its hands on political dissidents in Hong Kong – a serious concern after booksellers selling books critical of China have gone missing in recent years. Over the weekend, hundreds of thousands of people turned out to protest the bill – which was supposed to go to a vote today. But demonstrations near the legislature forced the vote to be delayed…then took a turn for the worse.

Tens of thousands of people turned out to block the country's legislature so it couldn't vote on the bill. They succeeded: the vote was delayed…though it's still expected to go to a vote by next week. But protesters also clashed with police – protesters throwing bricks and other objects, police firing into the crowd with tear gas and rubber bullets. The last time protests got this big was in 2014, when pro-democracy protests brought Hong Kong to a standstill.

Hong Kong's relationship with China has long been a source of tension. And while it's been able to maintain its own legal and political systems, it looks like some of those lines are being blurred. And it's leading to a major political crisis that Hong Kong hasn't seen in years.

Who's opening their wallets to pay some legal fees…

Sprint and T-Mobile. Yesterday, a group of state attorneys general filed a lawsuit to block their merger. The two had thought about getting hitched for years, but back in 2014 things didn't work out after pushback from antitrust regulators in the Obama admin. But last year, they decided to go for it again, saying a merger could help with 5G tech and broadband in rural areas. Now these AGs argue it would hurt competition, lead to price hikes for customers, and disproportionately affect lower-income and minority communities in urban areas. The DOJ and FCC still have to give their input on the merger. ($: What's money got to do with it? Here's how a Sprint-T-Mobile merger could affect your wallet.)

The Trump admin. Groups like the ACLU and Planned Parenthood are suing. The reason: a federal rule that would let health care workers refuse certain services if they go against their religious or moral beliefs (like abortions and sterilization). The Trump admin says that these workers shouldn't have to choose between their jobs and their beliefs, giving President Trump's conservative religious base some love. But these groups say it would encourage discrimination against women, minorities, and the LGBTQ+ community – and prevent them from getting legal and sometimes life-saving procedures. The rule is scheduled to go into effect July 22.

What Congress is dealing with…

Suing people. Yesterday, the House voted to give lawmakers authority to sue people who defy congressional subpoenas. The resolution was approved on party lines. If you're wondering if this has to do with the Mueller report...it does.

Jon Stewart. Yesterday, the comedian spent the day on Capitol Hill condemning Congress's lack of action around funding for 9/11 first responders and victims. The compensation fund is running out of money, fast. Stewart has long been an advocate. And called on Congress to show up for the people that didn't hesitate to show up for America during the attacks. The House is reportedly set to vote on a bill this week that would permanently extend the fund beyond 2020.

…Oh and House Intelligence Committee Chairman Adam Schiff (D-CA) is demanding more info around reports that the White House blocked an official from giving his piece on climate change.

Who's making a statement…

Alabama Gov. Kay Ivey (R). Earlier this week, she signed a law requiring chemical castration against some convicted sex offenders. How it works: felons would be required to take a drug that would make their bodies stop producing testosterone and affect their sex drive. The law would require those convicted of certain sex crimes against victims younger than 13 to take it as part of their parole. And start the treatment at least one month before being released– until a judge says it's no longer necessary. This new law is set to take effect in September. Alabama is the seventh state to have similar laws around this.

When you have your stars and stripes on…

Skimm This. Our daily podcast kicked off the first game for the US at the Women's World Cup. The team was undefeated last season and performed the impossible yesterday when they beat Thailand 13-0. Listen to hear why these record-breaking women are goals.

Not as good as it sounds. It's a tube of ranch dressing, relabeled so that kids are tricked into eating their veggies. Come on, kids are smarter than this.