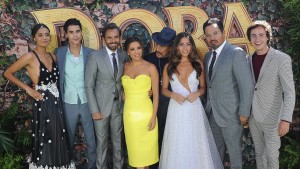 A new report found that Latinos are under-represented both behind and in front of the camera.

I thought Hollywood was supposed to be getting more diverse?

You would think. Earlier this year, a report found that women and people of color have been making gains in the industry. Last year’s top films had more diverse leads than ever before.

Not everyone is seeing the benefit of that. A new study analyzed the 1,200 top box office movies from a 12-year period (2007 to 2018). Out of more than 47,000 speaking characters, a total of 4.5% were Latino. About a quarter portrayed lawbreaking characters like gang members and drug dealers. One-eighth were shown as poor or impoverished. And across the 100 top-grossing movies, only 3% featured Latino actors as leads or co-leads. We’ll let that sink in.

You said behind the camera, too?

Yes. Only 3% of producers and 4% of directors were Latinos. Of those directors, 48 were male and only one was female.

No, it doesn’t. We’ll drive it home: In 2018 alone, only 5% of the top-grossing movies had speaking roles for Latinos. That number was the same in 2008. It’s especially disappointing considering that Latinos made up 18% of the US population last year and were 24% of the frequent moviegoers.

It’s not clear. But some worry that a lack of diverse representation in media may harm minorities’ self-esteem. And that how minorities are portrayed onscreen can affect how people think about them.

This isn’t the first time researchers have rung the alarm on underrepresentation of Latinos in the US. And unless Hollywood makes an effort to change things, it likely won’t be the last.

What has more than baby powder to worry about…

Johnson & Johnson. Yesterday, a judge ordered the company to pay $572 million for its role in the opioid crisis. In 2017, Oklahoma’s AG sued J&J and several other big companies for allegedly fueling the crisis. He said they did things like downplay drugs’ addictive potential and influence doctors to prescribe opioid products. Some companies – like Purdue Pharma (which makes OxyContin) and Teva Pharmaceutical Industries – settled. But J&J argued that its products were legal and FDA-approved. Now a judge is saying ‘disagree.’ And is making J&J pay up.

The lead crisis in Newark, New Jersey. Yesterday, officials announced a $120 million plan to speed up the replacement of 18,000 lead service lines. Lead contamination has been an issue there for years – not because of the water source itself but because of aging lead pipes. Late last year, officials distributed water filters (like the kind used in Flint, Michigan) to try to help, but testing showed some of the filters weren’t working properly. And the city had to distribute out bottled water. Now, officials want to borrow $120 million from the county to cut down the time it would take to replace the service lines from 10 years to under two and a half. City and county officials are reportedly expected to vote on the proposal today.

Skimm This: Our podcast recently went into the wider implications of the water crisis in New Jersey’s biggest city.

The G7. Yesterday, world leaders at the summit agreed to a $20 million aid package to help Brazil and neighboring countries fight fires in the Amazon rainforest. More details on the aid package will be presented next month at the United Nations General Assembly.

Indonesia. Yesterday, its president announced it’s moving its capital from Jakarta to the island of Borneo. The decision comes as Jakarta is dealing with a number of issues, including the fact that it is sinking into the sea. Really.

Where all of your favorite celebs were last night…

The MTV Video Music Awards. Here’s what you missed: Missy Elliott, full stop, end of story. Lizzo was also good as hell. Taylor Swift won video of the year, but John Travolta almost missed it. And Lil Nas X got his first lil moon guy. Take that to your old town road.

Whose work performance got a standing ovation…

Serena Williams. Yesterday, she beat Maria Sharapova in straight sets – the first-ever US Open meeting between the two.

What to get your younger family members for the holidays…

When your friend wants to quit meat…

Is it still finger lickin’ good?