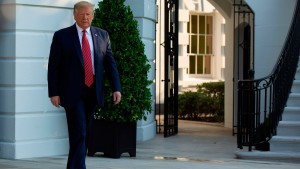 You're about to tell me what this is about, so I'll sit tight.

A whistleblower complaint. Last week, it reportedly came out that a US intelligence official filed a complaint about multiple issues involving President Trump. Including that Trump allegedly pressured Ukraine's then-newly elected president to investigate a company with ties to former VP Joe Biden's son. The acting director of national intelligence apparently found the complaint so alarming that he labeled it a matter of "urgent concern."

So what do we know?

That Trump spoke with Ukrainian President Volodymyr Zelenskiy in July. That he reportedly asked Zelenskiy eight times during this call to cooperate with his personal lawyer Rudy Giuliani on investigating Biden's son Hunter. That the convo happened while Ukraine was awaiting US military aid – but Trump claims there was no "quid pro quo." And that a few weeks later the complaint was filed.

Back up. Why would Trump's lawyer be investigating Biden's son?

In 2016, Biden pressured the Ukrainian gov to fire its top prosecutor, who was widely seen as failing to fight corruption. That prosecutor had been investigating a natural gas company where Biden's son had served on the board. Trump claims that Biden was trying to push the prosecutor out to protect his son. Biden says 'absolutely not' and that Trump is doing this because he's scared Biden will beat him in 2020. He also reportedly pointed out that the international community was the one calling for the prosecutor to go.

Usually when a complaint of "urgent concern" is filed, lawmakers are notified. But the Trump admin has refused to turn the complaint over to Congress apparently citing presidential privilege. Biden and some Dem lawmakers have called for Trump to release the transcript of the phone call. Sen. Lindsey Graham (R-SC) is calling for the DOJ to look into Biden's connections to Ukraine. And some Democratic reps are throwing around the 'i' word again.

On one side, Biden is accusing the sitting US president of abusing the power of his position to dig up dirt on a political rival. On the other, the Trump admin is implying that Biden could have acted corruptly to benefit a family member. Either way, it's not a good look.

Israel. Yesterday, the country's Arab parties backed centrist Benny Gantz for prime minister. It's the first time in over 25 years that the group – which has long protested government policies toward Israeli Arabs and Palestinians – endorsed a candidate. It says not to take this move as support for Gantz's policies. Instead it wants to use its leverage as the country's third-largest parliamentary group to oust right-wing PM Benjamin Netanyahu, whose party came in second after Gantz's. It's now up to Israel's president to coordinate talks for a unity government.

Iran. Yesterday, FIFA's president said the country is getting on board with the times and will allow women to attend next month's World Cup qualification game. You know, a thing you'd already think is allowed. But in Iran, women have been banned from entering stadiums during men's sporting events for the last 40 years. The ban has gotten more attention recently, since a woman died earlier this month from setting herself on fire after getting arrested for attending a game disguised as a man. Many around the world told Iran: 'not ok.' So did FIFA, which had been advocating for an end to this ban. Now FIFA says Iran has assured it that women will be allowed to attend the qualification game in Tehran. Let's see if that actually happens.

What many tourists are paying attention to...

Thomas Cook. Yesterday, the 178-year-old British airline and travel company went bankrupt, leaving around 600,000 customers stranded around the world and 21,000 employees without jobs. Now, over the next two weeks, the UK is launching its largest ever peacetime operation to bring back more than 150,000 stranded UK citizens.

Who doesn't have time for stigma, thank you...

Jonathan Van Ness. The "Queer Eye" star recently shared his HIV status, describing himself as an out-and-proud "member of the beautiful HIV-positive community." JVN says he hopes to break down misconceptions and stigmas about living with HIV.

The Emmys. It's time to watch "Fleabag." And "Chernobyl." There was clapping. It was hard. Billy Porter made history with his best actor win. Alex Borstein told women to step out of line. Jharrel Jerome dedicated his win to the Exonerated Five. And Peter Dinklage reminded you why you watched "Game of Thrones."

Who is NFLeaving the chat...

Antonio Brown. Yesterday, the wide receiver said he "will not be playing in the NFL anymore." The announcement comes as Brown faces rape and sexual assault allegations, all of which he has denied. And days after he was dropped by the New England Patriots.