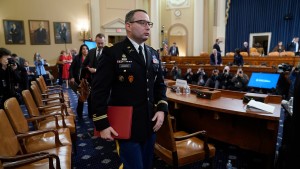 Week two of the public impeachment inquiry hearings is getting feisty.

Yep. Remember, House Democrats launched this inquiry to figure out if President Trump abused his power, in part by seemingly pressuring Ukraine's president to investigate former VP Joe Biden and his son for corruption in a July phone call. Yesterday, four officials kicked off a big week of public hearings in front of the House Intelligence Committee.

Lt. Col. Alexander Vindman...the top Ukraine expert on the National Security Council. He said he couldn't believe what he heard on the call. And that he reported it to an attorney out of duty. And he refused to answer questions that may involve identifying the whistleblower. And didn't appreciate Rep. Devin Nunes (R-CA) not calling him by his military title.

Jennifer Williams...an adviser to VP Mike Pence. She called the July call "unusual." And refused to answer questions about a September call between Pence and Ukraine's president because her counsel said it's classified. She also said the US withholding military aid to Ukraine could have given Russia the upper hand.

Kurt Volker...the former special envoy to Ukraine. He said he didn't know of any link between the US withholding military aid to Ukraine and the investigations Trump wanted. He also characterized these investigations as "conspiracy theories" and called Biden an honorable guy. He said the allegations against Biden are "self-serving and non-credible." It's worth noting: this was a witness requested by Republicans.

Tim Morrison...the former National Security Council official. He testified that he grew uneasy over the withholding of military aid to Ukraine. And discussed his concerns with then-national security adviser John Bolton. He, too, was a witness requested by Republicans.

The impeachment inquiry continues with the US Ambassador to the EU Gordon Sondland. He's become a major player in all this. He's the one who revised his closed-door testimony and said aid was linked to the investigations Trump wanted. And was named-dropped last week as having been on another call with Trump about all this. His testimony kicks off at 9am ET, followed by two others.

The witnesses in these hearings are a combination of White House aides, experts, and diplomats. Many are sharing a similar story that they were uncomfortable with the president's apparent request for an investigation into his political rival. Dems are hoping that by putting this narrative in front of the public, it makes a clear case for impeachment. Republicans are nowhere near convinced.

Iran. Yesterday, Amnesty International announced that over 100 people have been killed in the country's recent protests. And says the death toll might actually be even higher. Reminder: Iran has been dealing with protests since last week – after its gov announced a spike in gas prices. Internet is still almost entirely shut down, limiting the flow of information in and out of the country.

What has some legal updates...

Jeffrey Epstein's death. Two federal guards – who were on duty the night that the convicted sex offender died by suicide – were charged yesterday. They were supposed to check on inmates, including Epstein, every 30 minutes. Instead, they were apparently online shopping, watching sports news, and sleeping. They're being charged with conspiracy and falsifying records. They both pleaded not guilty and were released on bond.

Julian Assange. Swedish authorities are dropping the investigation into a rape allegation against the WikiLeaks founder. And said that the evidence is "not strong enough" to file an indictment. Assange is currently in a British prison and fighting US extradition for charges under the Espionage Act. This Swedish decision could make it easier for the US to extradite him now that Sweden's extradition request may no longer hold

Warby Parker. The eyewear retailer that was ahead of the curve on the whole 'direct-to-consumer' thing has its sights on a new product. It launched Scout – a line of daily contact lenses

What you're gonna tell your kids about one day...

This was "The Aristocats."