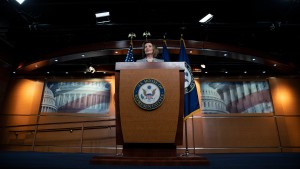 Today, the House is expected to vote on whether to impeach President Trump.

It all started over a July phone call between President Trump and Ukrainian President Volodymyr Zelenskiy. In it, Trump seemingly urged him to investigate former VP Joe Biden and his son for corruption – while withholding nearly $400 million in aid. Now, the House is expected to vote on two articles on impeachment against Trump: abuse of power and obstruction of Congress – aka the findings from the Democratic-led House Intelligence and Judiciary Committees.

Remind me again about those findings.

Earlier this month, after weeks of hearings, the Intelligence Committee released a 300-page report. It accused Trump of abusing his power, describing evidence of his misconduct as “overwhelming.” It said Trump sought election interference from a foreign government – compromising national security. And accused Trump of obstructing Congress’s impeachment inquiry.

And the Judiciary Committee?

It held its own hearing with legal scholars on whether Trump’s actions met the constitutional grounds for impeachment. Then it released a 658-page report explaining the committee’s decision to move charges against Trump to a House vote. The report said that the president committed “multiple federal crimes” including bribery and wire fraud. And that he “betrayed the national interest” and “the people of this Nation.”

That he did nothing wrong. Yesterday, he sent a scathing letter to House Speaker Nancy Pelosi (D-CA), denouncing what he called a “partisan impeachment crusade.”

Got it. Back to the vote.

First, a debate in the House. That’s expected to start at 9am ET and go on for hours. After it’s done, congressional reps are expected to vote – largely along party lines – to impeach Trump.

A Senate trial – where lawmakers decide whether or not to remove Trump from office. Senate Majority Leader Mitch McConnell (R-KY) will run that part. He’s made it clear he’s not an “impartial juror,” dismissing the process as partisan.

With a Republican-majority Senate, Trump isn’t expected to be removed from office. Still, if the House votes as expected, today will be historic – marking only the third time in US history that a president is impeached.

Who’s lifting the veil of secrecy…

Pope Francis. Yesterday, he abolished a secrecy rule in the Catholic Church – known as “pontifical secrecy” – used to limit cooperation with law enforcement on sex abuse cases. The decision, which takes effect immediately, comes after a summit earlier this year on preventing abuse in the church. Survivors say the change is “overdue” but that more work is needed. Case in point: the Vatican apparently still doesn’t require clerics to proactively report abuse claims to the police. Or to go public with any documents related to sex abuse in the church.

What may have some explaining to do…

The Mormon Church. A whistleblower has filed a complaint to the IRS over the church’s alleged handling of $100 billion. The money was apparently meant for charitable purposes (like investing in education) but the whistleblower is accusing the church of investing in for-profit ventures, like a shopping mall in Utah and a struggling insurance company. That may raise problems with the IRS, which gives religious groups an assist on taxes only if a large part of their income goes to charitable activities. The church says it complies with laws around its donations and investments, and that the allegations are “based on a narrow perspective and limited information.”

Why the gov is taking out its credit card…

This spending package. Yesterday, the House passed a $1.4 trillion spending package to fund the gov through September 2020 and avoid a repeat of last time. The package includes a permanent repeal of three Obama-era taxes implemented under the Affordable Care Act. It also raises the legal age to buy tobacco products (including e-cigs) from 18 to 21. And provides funding to address the opioid crisis and gun violence research. The Senate has to approve it before it goes to President Trump’s desk.

This defense bill. Yesterday, the Senate passed a $738 billion bipartisan defense bill. It establishes funds for the creation of a Space Force – a sixth branch of the US military and a top priority for Trump. It also grants 12 weeks of paid parental leave to more than 2 million federal workers – an issue important for Democrats and President Trump’s daughter-slash-adviser, Ivanka.

Psst…here’s what granting federal workers paid parental leave could mean for your wallet.