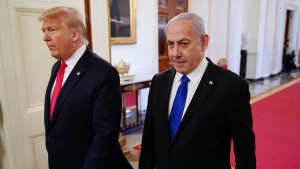 President Trump has unveiled his long-awaited peace plan for the Middle East.

Yup. The plan’s been about three years in the making. And is the latest US effort to tackle the decades-long conflict between Israel and the Palestinians. Reminder: the conflict is over land including the West Bank and the Gaza Strip. Yesterday, in his latest move to weigh in on the region (see this and this), Trump announced the details of his peace plan, alongside Israeli Prime Minister Benjamin Netanyahu.

Give me the nuts and bolts.

Trump proposed a “realistic two-state solution”: one state for Israelis, one for Palestinians. The plan would recognize Israeli settlements in the West Bank and give Israel almost 30% of that territory. As well as uphold Israel’s sovereignty over Jerusalem. The second state, for Palestinians, would include the remaining 70% of the West Bank and designate East Jerusalem as their capital. The state would have limited sovereignty with no army and continued Israeli security control in some areas.

Interesting. How’s this going to happen?

It’s not…yet. The Palestinian Authority would have to do things like renounce terrorism, acknowledge Jerusalem as the capital of Israel, and include a “complete dismantling” of militant groups like Palestinian Islamic Jihad and Hamas. In exchange, Israel would freeze new settlement construction for four years while negotiations continue. The plan also aims to help grow the Palestinian economy, by calling for $50 billion in investments over 10 years for the Palestinian state.

Trump has called the deal a “win-win” for both sides. But Palestinian leadership, in line with earlier boycotts, has already rejected the proposal. Meanwhile, Netanyahu called the plan “a realistic path to a durable peace.” Busy day for him, since the announcement came the same day he was indicted for bribery and fraud, among other things.

Although Trump has presented a plan he says is “realistic,” critics say it mostly favors Israel and may bring more conflict to the Middle East. This rollout comes as the leaders of the US and Israel each face political hurdles in their own countries, with Trump’s impeachment trial and Netanyahu’s indictment and candidacy in Israel’s third election in less than a year.

The US budget deficit. Yesterday, a Congressional Budget Office report predicted the federal deficit will surpass $1 trillion this year for the first time since 2012. This is in part due to President Trump’s 2017 tax cuts and increased gov spending from programs like Medicare and Social Security. A gap between revenue and spending means the US will have to borrow even more money to cover the balance, and will increase the national debt even more.

Psst…If federal debt can’t be tamed, the economy could get hurt. Not good for anyone’s wallet. Here’s what else this news means for yours.

What’s saying ‘I can handle this on my own, thanks’…

The UK. Yesterday, in a blow to the US, the UK said it would use Huawei to help build its new 5G network. The Trump admin had voiced security concerns, including spying, over the Chinese telecom company’s products. It wanted the UK (among others) to stay a-Hua-way from the company. But Huawei has been working with the UK since 2003. Now, the UK will still work with the company. But Huawei will be limited to supplying no more than 35% of the country’s network equipment and will be excluded from “sensitive ‘core’” parts of 5G.