Daily Skimm: COVID-19: Masks, Another 'You're Fired' Moment, and a Legendary Zoom Background 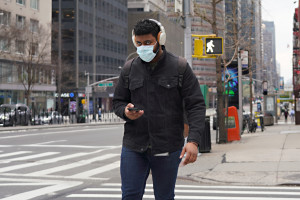 The CDC rolled out new recommendations about masks to address COVID-19.

That Americans should cover their faces when going out. Before we get into that, let's take it back a couple of months. In January, the CDC said face masks should be reserved for health care workers, those who are sick, and those caring for someone who is sick. In February, the US surgeon general urged the public to stop buying face masks because it would lead to a shortage for health care workers on the front lines. Now, the CDC is advising Americans to use cloth face coverings like homemade masks, bandannas, or scarves in public settings (think: grocery stores, pharmacies).

Why the sudden change?

Because of recent research about the virus and how it's transmitted. Reminder: the virus can spread through respiratory droplets by coughing, sneezing, or even talking in close proximity to someone. Recently, the CDC director said 25% of infected people may not show symptoms but can still transmit the virus.

So what can I do?

The CDC is asking Americans not to buy surgical masks or N95 respirators – which may be most effective against transmitting droplets – to reserve them for health care workers and first responders. Instead, they are recommending you bring out the needle and thread and learn how to make your own face mask using household materials. Tutorials can also be found here and here. Note: some tests found that 100% "quilters cotton" fabric is better than t-shirt cotton at filtering small particles.

You're welcome. But remember that wearing a face mask isn't the only thing you should be doing to protect yourself or others from the virus. While some experts say that homemade masks work to prevent droplets from going into the air, others cautioned that masks could provide a false sense of security. And could lead to fewer people following social distancing guidelines. So one more time for the people at the park: stay home. And if you must leave your house, cover your face and stay six feet away from other people. Oh, and wash your hands.

The American public has been receiving differing information on how to help curb the coronavirus spread. And the mixed messages between the White House and the CDC have not helped. However, in the meantime, we can still do our part and take care of each other by following the guidelines.

With more than 1.2 million people infected worldwide and over 65,000 killed, officials are sharing an important message: brace yourselves.

Over the weekend, President Trump and US Surgeon General Jerome Adams said that this week will be the US's worst yet for COVID-19 deaths. Adams described the country's upcoming period as the "hardest and the saddest," comparing it to a Pearl Harbor or "9/11 moment." And the president said that the large loss of life could be far worse without things like social distancing.

Meanwhile across the pond, Queen Elizabeth II urged Britons to show "self-discipline" in the face of the coronavirus pandemic. The queen's rare televised event was only her fourth address to the UK in her 68 year-reign – not including her annual Christmas speech. And came moments before Prime Minister Boris Johnson was hospitalized as a "precautionary step," after testing positive for COVID-19 last month. The queen's address aimed to lift the country's spirits, thanking health care workers and those who were staying at home. She said she hopes "everyone will be able to take pride in how they responded to this challenge."

What's ready for a change...

The Trump admin. On Friday, President Trump fired Michael Atkinson...aka the intelligence community watchdog who played a key role in Trump's impeachment. Last year, he got the whistleblower complaint about Trump's July 2019 conversation with Ukraine's president – the one calling for an investigation into the Bidens. He said 'this looks interesting,' and passed it on to Congress. Trump now says he had lost confidence in Atkinson for handing Congress a "fake report." But critics see this as political retaliation.

Tom Dempsey. Over the weekend, the legendary New Orleans Saints kicker died of coronavirus-related complications at age 73. Dempsey set a field goal record that lasted more than four decades and was inducted into the Saints Hall of Fame in 1989. He did this despite being born without toes on his right kicking foot. Since 2012, he'd also been battling Alzheimer's disease and dementia. Saints owner Gayle Benson said Dempsey "spoke directly to the power of the human spirit." RIP.

Bill Withers. Last week, the soul singer who wrote "Ain't No Sunshine" and "Lovely Day" died from heart complications at age 81. Withers entered the music scene after serving nine years with the US Navy and was a three-time Grammy winner. His song "Lean on Me" has recently been used by health care workers and others to help raise spirits during the coronavirus pandemic. Withers' family said they hoped "his music offers comfort and entertainment as fans hold tight to loved ones." RIP.

Whose basketball legacy lives on…

Kobe Bryant's. Over the weekend, the Naismith Memorial Basketball Hall of Fame announced that the five-time NBA champion would be posthumously inducted later this year. Bryant – who died earlier this year in a helicopter crash, along with his daughter and seven others – will be honored along with Tim Duncan, Kevin Garnett, and six others.

Whose reign may not be over…