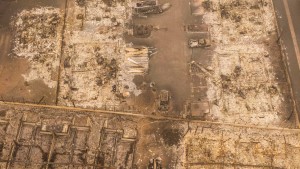 The West Coast is blaring the alarm on climate change.

For decades, scientists have warned about the impact of climate change. They predicted higher temperatures would lead to extreme weather – more heat waves, hurricanes, and forest fires. Fast forward to today and those predictions are on clear display IRL. And while scientists aren't surprised by the weather we're seeing now, they're warning things could get way worse.

California summers are 2.5 degrees warmer than they were in the '70s. And they're reportedly on track to heat up an extra 4.5 degrees by the end of this century. Already, the hotter temps this year created dry conditions that fueled six of the state's largest wildfires on record. And more than 4.5 million acres have burned across the West. Oregon authorities said they were preparing for a "mass fatality incident." At least 35 people have died in the fires. And the air quality across the West Coast is some of the worst in the world – which could make people more likely to get infections, including the coronavirus. But there are other factors leading to the fires besides climate change.

What else is to blame?

Human actions. Not only for climate change itself but for sparking the fires – both intentionally and unintentionally. Like gender reveal parties. Or building housing developments in fire-prone areas (since new buildings can burn much faster). And then there's forest management – something President Trump has repeatedly pushed California to do more of. But fire officials say some of these recent fires are burning in grassy, hilly areas that are especially dangerous after months of drought. And governors in WA, OR, and CA all say these threats are exacerbated by one thing and one thing only: climate change.

Scientists and state officials say the devastation from the wildfires should be a wake-up call to take more action – both big and small – against climate change. Meanwhile, firefighters are working day and night to contain the blazes that are raging on the West Coast. Here's how you can help.

Compton, California. Over the weekend, two Los Angeles County sheriff's deputies were shot while sitting in their patrol car outside a Metro station. Authorities said they were "ambushed" by a gunman who still hasn't been found. The deputies – a 31-year-old woman and 24-year-old man who joined the department last year – suffered multiple gunshot wounds and were rushed to the hospital. They both had surgery and are in critical condition but recovering. After the shooting, protesters gathered outside the hospital where the officers were being treated and the sheriff's department said some blocked the ER's entrance. The suspect has yet to be identified. But both presidential candidates have weighed in – President Trump said the death penalty might be appropriate and Joe Biden said the shooter "must be brought to justice."

What's not all tea and crumpets…

Brexit. Last week, the UK said it might change the terms of its deal to leave the European Union – even though that could mean breaking international law. Reminder: In January, Brexit officially happened and the UK said 'bye' to the EU. But since breakups are hard, the two sides gave themselves until the end of 2020 to transition. That's turned out to be (no surprise) difficult. One major sticking point? Northern Ireland. Now, UK PM Boris Johnson says if the UK and EU can't reach a new deal, the UK will have to break part of the original divorce agreement.

Psst…Brexit has ripple effects across the pond. Here's how the UK-EU divorce could affect your wallet.

Where there are changes happening…

Japan. Today, the country's ruling party elected Yoshihide Suga as its new leader to replace Prime Minister Shinzō Abe. Reminder: Last month, Abe – the country's longest-serving PM – resigned because of health issues. He had been leading Japan for over seven years. Suga is the longtime chief cabinet secretary to Abe, and has promised to continue his "Abenomics" – a policy intended to jumpstart the country's economy through reforms and government spending. And fight the coronavirus pandemic. Next up: Parliament is expected to elect the new party leader as the new PM on Wednesday.

What's decided to 'accept this rose'…

TikTok. Yesterday, it reportedly chose Oracle as its business partner in the US – swiping left on Microsoft. Reminder: Trump's threatened to ban the Chinese video-sharing app that he says poses a national security risk. And he gave several companies – who were in the running to buy (and save) TikTok's US operations – a strict deadline to get the deal done before it gets banned. Now, TikTok says this deal with Oracle will satisfy the admin's security concerns, although the details of the agreement are TBA.

Naomi Osaka and Dominic Thiem. Over the weekend, Osaka won her second US Open title (in just three years), beating Victoria Azarenka. She also brought attention to issues off the court. And for the men, Thiem won his first Grand Slam title, beating out Alexander Zverev in a five-set match.

...Oh and if you didn't hear from some of your friends yesterday, it may be because "Sunday Night Football" is back.

Who gave us the battle we didn't know we needed...

Where you can spend time chillin' out maxin' relaxin' all cool...