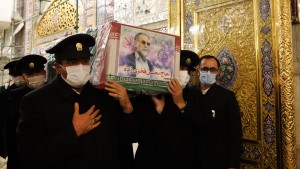 Mohsen Fakhrizadeh was one of the masterminds of Iran's military nuclear program, which Iran claims it formally disbanded in 2003. He was compared to the American scientist who spearheaded the Manhattan Project in World War II. In recent years, Fakhrizadeh had allegedly been working to design a bomb small enough to fit on a missile.

An Iranian security official reportedly accused Israel of using "electronic devices" to remotely kill Fakhrizadeh on Friday. No one has claimed responsibility for his killing. But some – including Iran and US experts – also believe it has Israel's fingerprints on it. Especially since the ambush had the markings of a Mossad (Israel's spy agency) operation. And because Israel's pulled off attacks on Iran's nuclear program and its scientists before (see: this). Israel hasn't commented.

There are theories. Like the idea that the outgoing Trump admin is more likely to tolerate an attack on Iran than an incoming Biden admin. President-elect Joe Biden has said he would rejoin the 2015 Iran nuclear deal "if Iran returns to strict compliance." Compare that to President Trump, who has pulled out of the deal, killed Iran's top general, and come this close to more airstrikes with Iran on multiple occasions. Most recently, two weeks ago.

Iran is promising retaliation in "proper time." And the country's defense minister reportedly vowed to continue Fakhrizadeh's work "with more speed and more power." The Trump admin isn't commenting. Neither is Biden's transition team. The UN is urging restraint.

Fakhrizadeh was a central figure to Iran's weapons program, and his death is considered a blow to the country's nuclear initiatives. Now, it's up to Iran to choose between retaliation or waiting for a new admin that may be more receptive to working things out.

Why people were worried about Thanksgiving…

COVID-19. Millions of Americans traveled last week, countering CDC recommendations. It's not clear when we will know its impact. But Dr. Anthony Fauci warned that the US could see a "surge upon a surge" of cases. It comes as hospitals across the country are already filling up, with rural hospitals especially hard hit. Los Angeles County's issued a stay-at-home order for the first time since March. The NFL is dealing with an outbreak of its own. But NYC is going the opposite route: it's reopening elementary schools after some parents said at-home learning was taking a toll on their children. And amid ongoing uncertainty over the role of children in transmission.

SCOTUS. Last week, it ruled 5-4 against New York's restrictions on religious gatherings. In October, Gov. Andrew Cuomo (D) had limited the number of people who can attend religious services to curb the spread of COVID-19. But religious groups called foul, invoking the First Amendment. When similar cases made their way to the court from California and Nevada, SCOTUS ruled in favor of the governors. But there's a new justice in town. And this was the first major ruling in which Justice Amy Coney Barrett swung the court decisively to the right.

…Oh speaking of the Trump admin, the president pardoned former national security adviser Michael Flynn, who twice pleaded guilty to lying to the FBI. It's the latest example of Trump pardoning a political ally, in this case one he saw as the victim of a Russia investigation "hoax.

Where tensions are boiling…

France. Over the weekend, tens of thousands of people across the country took to the streets. The protests were two-fold, but related. After a video showing police beating and injuring a Black man for not wearing a mask went viral, many were outraged by the footage. The attack received widespread backlash, including from French President Emmanuel Macron who said the images "shame us." Four officers have been charged in connection with the beating. But the protests came the same week lawmakers in France's lower chamber passed a controversial security bill that includes a measure that would prevent people from filming police officers. Now, opponents of the bill like civil liberty groups and the media are saying it could hinder the freedom of press and of reporting police brutality. And are calling for its withdrawal.

Who's kicking the glass ceiling…

Sarah Fuller. Over the weekend, she became the first woman to play in a Power 5 football game when she led the Commodore's opening kickoff of the second half against Missouri. And did so while wearing a helmet with the phrase "Play Like a Girl."

Who's one less lonely boy…