Daily Skimm: Racism in the UK, Afghanistan, and the MLB All-Star Game 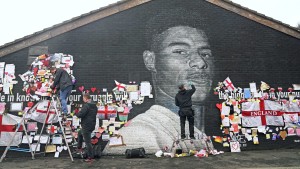 The Euro 2020 final. More than 30 million people in Britain tuned in to watch England take on Italy on Sunday. For many, football (soccer for Americans) is more than a sport. It holds traditions, spurs patriotic unity, and can help the economy. But it comes with serious drawbacks. In its first major tournament final since 1966, England lost in the penalty shootout. It was a serious blow to the country that'd been chanting "it's coming home" for days. But the second England lost, its racist past resurfaced when fans directed their anger at the Black players that missed their penalty kicks.

Marcus Rashford, Jadon Sancho, and Bukayo Saka helped carry England to the Euro Championship final. Now, they've been hit with hundreds of offensive and racist comments flooding social media. Twitter removed 1,000 posts. And permanently suspended several accounts. Facebook is also hitting the 'delete' button. In Manchester, vandals defaced a mural of Rashford. But the sport has long had a darker (think: racist, sexist) side. England didn't name a Black starting player to the national soccer team until 1978. And throughout the years, fans have thrown banana peels at Black players and led monkey chants. FIFA and UEFA have put in place a 10-game ban for racism or discrimination by players. But all of this has got people talking.

What are they saying?

Police are now investigating the racist abuse against Rashford, Sancho, and Saka. UK Prime Minister Boris Johnson, the Duke and Duchess of Cambridge, London's mayor, and the English Football Association (of which Prince William is president) all condemned the attacks. But England's leadership is getting called out for its hypocrisy, and for speaking up now when they've stayed silent (or worse) in the past. Like Johnson, who's compared Muslim women to "letterboxes." Or Home Sec Priti Patel, who criticized Black Lives Matter protests and players who took a knee. And let's not forget the health secretary who denied racism existed in Britain. As if that's not enough, one study has found that domestic abuse in England went up regardless of whether the home team won or lost. But it was 38% higher without the W.

Earlier this year, the UN called on countries (including the UK) to dismantle the very real systemic racism felt worldwide. Now, England's having to grapple with its racist past – including in its monarchy – both on and off the field.

Gen. Austin S Miller. Yesterday, he stepped down as the top US general in Afghanistan. Miller was the longest-serving US commander in the nearly 20-year war against the Taliban and al-Qaeda. He oversaw the military effort during the Trump admin's peace talks, including the withdrawal of thousands of US troops from the country. Now, Miller's departure marks a symbolic end to the war. It comes days after President Biden announced that the US's military efforts would end on Aug 31. And after the US cleared out its largest and last air base in Afghanistan earlier this month. Gen. Kenneth "Frank" McKenzie will take over Miller's responsibilities, including overseeing remaining troops there.

Haiti. On Sunday, authorities there said they arrested Haitian doctor Christian Emmanuel Sanon in connection to President Jovenel Moïse's assassination. Last week, gunmen killed Moïse and critically injured his wife in their home. So far, authorities have arrested 18 Colombians and three Haitian Americans. Among them is Sanon, who lives in Florida and has accused the Haitian leaders of corruption. Authorities say Sanon hired a private security firm to recruit the gunmen. And reportedly had plans to take over as Haiti's president. Haitian police are still looking for five suspects. And the US is "analyzing" whether to send US troops to help the country.

Cuba. Yesterday, President Biden said the US supports anti-gov protests there. And urged Cuban leaders to "hear their people." The Communist country is facing its worst economic crisis in decades fueled by the coronavirus pandemic. Thousands of Cubans took to the streets – protesting high prices, food and medicine shortages, and the government's mishandling of the pandemic. But Cuban President Miguel Díaz-Canel is apparently blaming US sanctions for the country's poor state. Now, police are reportedly patrolling the capital of Havana to quell the protests. And dozens have been detained.

What's got some explaining to do…

The EPA. Yesterday, a new report said the gov agency approved toxic chemicals for oil and gas fracking back in 2011 under then-President Obama. Known as PFAS or "forever chemicals," the toxic substances don't break down – ever. Instead, they can build up in the human body and have been linked to cancer and birth defects. Now this report says there's evidence that oil and gas companies used PFAS in over 1,200 wells in six states (AR, LA, OK, NM, TX, and WY). Researchers allege the EPA had some concerns about the chemicals but still gave them the green light. The EPA's saying 'twas a different time.' And that changes have been made so that new chemicals are now reviewed for safety before they're used.

What's giving out a warning…

The FDA. Yesterday, regulators said that Johnson & Johnson's COVID-19 vaccine could increase the risk of Guillain-Barré syndrome (where your immune system attacks your nerves). Most people recover from the disorder, though (in rare cases) some have died. The FDA says the risk is very low – and that getting pricked still outweighs the shot's potential risks. The new warning follows a separate one on blood clots that federal officials issued earlier this year.

What's ready to pull out all the (short)stops...