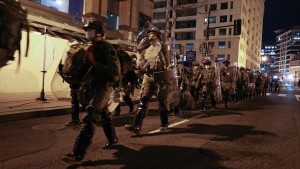 As the country prepares for Inauguration Day, security is at an all-time high.

Since the Capitol siege, DC is ramping up security like never before. The National Mall is closed. Tomorrow, 25,000 National Guard troops are expected – more than the number of service members stationed in Iraq and Afghanistan combined. Cities across the US from Boston to LA are taking similar steps, deploying guardsmen and police to state buildings for the coming days. So far, there have been several peaceful protests...though some demonstrators came armed. Police have arrested multiple people near the Capitol who've been found with at least one firearm and ammunition. Now, unlike with previous warnings, the FBI isn't taking any chances.

The FBI is vetting service members (yes, all 25,000 of them) to rule out any potential insider threat. What they're looking for: ties to extremist groups. The extra screenings come as one analysis found that at least 21 people who stormed the Capitol or were in the area had some military background (think: former US Marines and Army vets). And as other reports found that several off-duty officers appear to have participated. Dozens of people on the gov's terrorist watch list were also reportedly spotted. Speaking of the siege, there are updates...

The number of arrests tied to it keeps going up. Over the weekend, at least three people with alleged ties to the Oath Keepers and Three Percenters (right-wing extremist groups) were charged for their role in the riots. They join the list of about 100 people who've already been arrested. US officials continue to investigate whether the militia groups helped organize the attack on the Capitol. And whether they may have had international help. So far, the FBI has reportedly raked in evidence, including large bitcoin payments made to key alt-right members just before the riots.

Tomorrow marks the end of an era, one the country is just starting to process. In the meantime, the government is focused on a singular goal: ensuring the next era begins peacefully.

The US. Yesterday, it recorded more than 24 million COVID-19 cases, nearly a year after the virus was first detected in the country. The record came as Los Angeles County – one of the hardest-hit areas in the country – topped 1 million infections over the weekend. And confirmed the first case of a coronavirus variant. Officials believe the variant has been in California for a while, and it's been tied to a deadly outbreak at a hospital in San Jose.

Vaccines. On Friday, HHS Secretary Alex Azar said that the gov does not have a vaccine stockpile. Days earlier, the Trump admin had announced it was releasing all available doses so those eligible could get their first dose ASAP. Except now it seems there is apparently nothing to release. Because everything was reportedly used up in December. At least one state health director has said this could affect their plan to vaccinate some seniors. But Azar says there's "enough confidence" that current vaccine production will help meet demand.

...Oh, and because of this, NY Gov. Andrew Cuomo (D) is looking to buy COVID-19 vaccine doses directly from Pfizer.

The Netherlands. Last week, Prime Minister Mark Rutte and his cabinet resigned amid a child welfare fraud scandal. The news came after an investigation found that more than 20,000 families were wrongly accused of committing tax fraud over the course of several years. And were told to pay back tens of thousands of euros. The Dutch tax authority admitted to singling out dual-nationality families, reaffirming allegations of systemic racism in the gov. And after a parliamentary probe reportedly found that "fundamental principles of the rule of law" had been violated, the gov resigned. Rutte reportedly said "mistakes have been made on all levels" and found it "fair" that the cabinet step down. It will stay on as 'caretaker' until new elections are held in March.

Alexei Navalny. Yesterday, the Russian opposition leader was arrested as soon as he stepped foot on Russian territory. Last year, Navalny was poisoned and fell into a medically induced coma in Germany. Navalny and Germany suspected Russia was behind it. But Navalny reportedly said "I am not afraid" and decided to return home. Russian officials are saying he was detained for violating a suspended jail sentence. And is pushing for him to stay in prison until 2024. Foreign governments including the United Nations condemned the arrest, and Navalny is calling on his supporters to protest.

While some are making music in quarantine...

Others are falling in love.