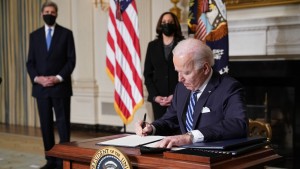 The US is taking on climate change.

What's in the forecast?

Plenty. For decades, scientists have warned about the disastrous effects of climate change. And last year saw some of their predictions come true. Case in point: there've been a record number of wildfires and hurricanes in the US, fueled in large part by rising temps. Scientists, orgs, and Greta Thunberg have called on world leaders to act before it's too late. So yesterday, President Biden picked up his pen. He signed a sweeping number of executive actions to address what he called an "existential threat." Here's how some of them break down:

Conservation and clean energy…Biden wants to conserve at least 30% of the US's lands and waters by 2030, and he's tasked his admin with creating a game plan to reach that goal. He directed the interior sec to hit 'pause' on new oil and gas leases on public lands and waters – a move that alone could prevent 19 billion tons of greenhouse gas emissions. He's also asking for a "rigorous review" of the current agreements. And called on his admin to create steps to double offshore wind energy production within the next ten years. As well as push for clean energy and sustainable infrastructure.

Job creation and environmental justice...The admin sees tackling climate change as an opportunity to create "well-paying union jobs." Biden set up several councils and initiatives focused on environmental justice and green jobs to make this all happen. He directed fed agencies to get zero-emission vehicles – something he reportedly says "will mean one million new jobs" in the American auto industry. And wants them to help low-income and minority communities that are typically located near high-polluting areas (think: power and coal plants).

Leadership…Biden called on Director of National Intelligence Avril Haines to investigate how climate change can pose a national security threat. And directed the US climate envoy (hi, John Kerry) to come up with ideas to fight climate change at the global level. The president also confirmed he'll host a climate summit with world leaders on Earth Day. Save the date for April 22. And plans to give more info on how the country will do its part to meet the Paris climate deal.

Oil lobbyists are saying 'why are you up in our drill?' The Biden admin believes this is an investment in the US economy in the long run – something many businesses believe, too. But oil groups and Republicans are worried about thousands of job losses in the near term, especially amid a recession. And while Biden's orders offer a sweep of changes, they don't call on everyday Americans to do their part (think: eating less meat, reducing air travel).

A reported two-thirds of people around the world (64%) see climate change as a global emergency. Now, the world's second-largest emitter of greenhouse gases (hi, it's the US) seems to agree it is a priority. But climate change won't be solved with the stroke of a pen – and there's more everyone in this country can do to reverse the trend.

GameStop and AMC. This week, both companies have been benefiting from a surging stock. The video game retailer and movie theater chain suffered immensely when the coronavirus pandemic first hit – closing locations across the country. But this month, GameStop's stock soared about 1,700%. Its share price went from $40 to $350 within a week. And yesterday, AMC's stock saw a rise of about 300%. All of this comes as traders have been driving the stock price up – many banking on intel from Wall Street Bets (a Reddit message board). Their plan: mess up short sellers. It worked, and some hedge funds are losing their minds...and money ($5 billion and counting). So much so that Treasury Sec Janet Yellen and others in the Biden admin are monitoring the situation.

Psst...doing something just because everyone else is = the "bandwagon bias." We Skimm'd how mental biases like this one can cost you.

Daniel Pearl. Today, Pakistan's Supreme Court acquitted the man convicted of kidnapping and murdering Pearl. In 2002, Pearl was working as a journalist for the Wall Street Journal, investigating Islamist militants in Pakistan, when he was abducted and beheaded. His death gained international attention amid concerns over growing terrorism threats. Authorities arrested and convicted four men in connection to Pearl's death. But last year, Pakistan's high court overturned the convictions of three men and overturned the main suspect's death sentence. Pearl's family appealed. Now, the court's ruled the men should be released immediately. Pearl's family lawyer called the decision a "complete travesty of justice" and called on the US gov to intervene.

The CDC. Yesterday, it said that the US could see as many as 514,000 COVID-19 deaths by Feb 20. The tally is based on current trends, and the agency is urging people to "remain vigilant." This comes as the world has surpassed 100 million coronavirus cases. And as countries try to get people vaccinated. Speaking of which, Americans may soon be able to get vaccinated at their local CVS.

While Kristen Stewart is getting ready for another film...

Amanda Gorman is getting ready for the Super Bowl.