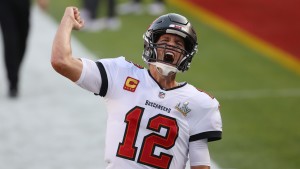 I don't do Roman numerals.

It means 55. Last night, the Bucs beat the Kansas City Chiefs 31-9 in Tampa, Florida. The Chiefs had exactly zero touchdowns. But the Bucs had four: one by running back Leonard Fournette, one by controversial wide receiver Antonio Brown, and two by dynamic duo QB Tom Brady and tight end Rob Gronkowski.

Yup. Tampa Bay hasn't seen a Super Bowl win since 2003. Last year, the team decided it could use some Brady magic...and won him over with a reported two-year, $50 million contract. He said 'I'll need backup' and helped coax BFF Gronkowski out of retirement. Turns out, it was a good idea. Brady took the team from the worst winning percentage in the league...to the Super Bowl. Now, at age 43 (the oldest player ever to make it to the big game) he won his fifth MVP award and seventh Super Bowl ring. Not bad for being the 199th pick.

What about the other fun stuff?

The Weeknd made our weekend. Reddit shouted out the underdogs. There was the Four Seasons. And Four Mayas. Shaggy still maintains it wasn't him. Toyota reminded everyone strength is more than just horsepower. There were two female coaches. And the Super Bowl's first female ref (hi, Sarah Thomas). The Boss brought his cowboy hat. One dude brought his sign. Another ran out on the field. And Amanda Gorman gave a tribute to the captains. But there were concerns.

Attendance was 'limited' to 25,000 people. There was (some) social distancing and many cardboard cutouts. But the gathering in Tampa – and at homes across the US – brought concerns of another COVID-19 spike just as we're experiencing a decline. There are also persistent concerns that the sport could be killing the players.

The country has been through a lot since last year's Super Bowl – and Americans were looking forward to an escape. The Bucs delivered. Now, many are crossing fingers the Super Bowl wasn't a Super Spreader. And that we can just have something nice for once.

Last month, in the most bipartisan presidential impeachment yet, the House voted 232-197 to charge then-President Trump with "incitement of insurrection" for the deadly Capitol riots. This week, the Senate will have the floor, deciding whether to convict Trump. Here's what to expect:

Logistics…The Senate trial begins tomorrow. It's unknown how long the proceeding will last, but both parties are saying 'let's make it speedy,' considering there's a new admin that's got an agenda to attend to. Also TBD if any witnesses will be called to testify. The man of the hour – Trump – has turned down the House impeachment managers' request for him to testify. And it's unlikely he'll be subpoenaed.

Arguments…House impeachment managers are expected to run through the events that led up to the Capitol attack to show that Trump is "singularly responsible" for inciting a mob of his supporters to storm the federal building. On the other hand, the former president's legal team is expected to argue that it's unconstitutional to impeach a president who's no longer in office. And that Trump's speech about election fraud ahead of the siege falls under First Amendment protections.

The crystal ball says...Trump's likely to be acquitted. Democrats need the support of at least 17 Republicans to convict. But in a test vote last month, only five Senate Republicans sided with Dems to even hold a trial at all.

COVID-19. Yesterday, a newly published study said that cases of the contagious UK variant have been doubling in the US about every 10 days. It was first detected in the US in December, and experts believe it could become the dominant strain by next month. Vaccine makers Pfizer and Moderna have said their doses appear to be effective against coronavirus variants. But other vaccine makers are facing some hiccups: a study found that AstraZeneca's vaccine offered "minimal protection" against the South Africa variant. Its initial 1 million doses were set to be rolled out to health care workers in South Africa this month, but that plan's now on hold while scientists take a closer look.

...Oh and speaking of vaccines, Johnson & Johnson asked the FDA to approve its one-shot COVID-19 vaccine.

Myanmar. Yesterday, tens of thousands of people turned out in the largest protests since 2007. A week ago the military arrested civilian leader Aung San Suu Kyi, charging her with illegally importing walkie-talkies, and declared a state of emergency. Now, despite an internet blackout, protesters rallied to demand Suu Kyi's release, using everything from balloons to pots and pans to voice their outrage with the military coup. The internet is reportedly back on. But protests continued today with police firing a water cannon in efforts to disperse the crowd.

Whose case has hit 'resume'...

Israeli Prime Minister Benjamin Netanyahu's. Today, he pleaded not guilty to corruption charges in a trial that's resumed in a Jerusalem court. In 2019, Netanyahu was indicted for fraud, bribery, and breach of trust. His trial had started in May but the coronavirus has delayed the proceedings. Now, Netanyahu is the first sitting Israeli Prime Minister to go on trial – just six weeks before the country holds its fourth election in two years. The PM, who has long denied any wrongdoing, is hoping to be reelected. But protesters have been calling on him to resign over the charges. If convicted, Netanyahu faces over a decade in prison. But a trial could take years to wrap up.

Christopher Plummer. On Friday, the award-winning actor died at the age of 91. Plummer's career spanned at least seven decades, earning two Tonys, two Emmys, and an Oscar. He was known for being a Shakespearean actor, playing roles in "Hamlet," "King Lear," and many others. But his performance as Captain von Trapp in "The Sound of Music'' launched him into stardom. He'd go on to appear in many other films, including "The Insider," "12 Monkeys," and "Knives Out." Julie Andrews remembered her former co-star, saying the "world has lost a consummate actor" and a "cherished friend." RIP.