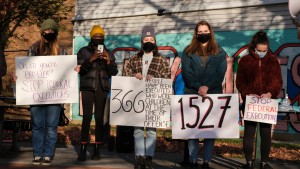 Virginia will become the first Southern state to abolish the death penalty.

Speaking of, time for a quick history lesson. Virginia's use of the death penalty dates back to colonial times – when a spy for Spain was executed in 1608. Since then, Virginia's put more people to death (reportedly nearly 1,400) than any other state. Since the Supreme Court reinstated the death penalty in 1976, the state has executed 113 people – second only to Texas. Now, VA lawmakers want to make sure it never happens again.

Yesterday, the state's Democratically-controlled legislature approved a bill to end capital punishment. Gov. Ralph Northam (D) is expected to sign it and it would go into effect in July. If that happens, two Black men who are currently on death row will have their sentences commuted to life in prison without parole. In their arguments, Dem lawmakers said it was time to "stop this machinery of death" that disproportionately affects people of color. Some Republicans agreed. But most didn't, arguing that those responsible for a heinous crime should be executed. And that the death penalty can provide justice for the victims and their families. The bill sparked a broader conversation about racial justice.

Virginia's history with the death penalty shows the prevalence of systemic racism in the criminal justice sphere. For years, death sentences were explicitly decided not just by the level of the crime, but by the suspect's race. Even after anti-discrimination laws were put in place, all-white juries perpetuated systemic racism. From 1900 to 1969, Virginia executed 73 Black defendants for robbery, attempted rape, or rape. Not a single white defendant was executed for the same crimes. But it's not just Virginia's history, it's America's past and present too. Black Americans make up about 13% of the US population – but 42% of inmates on death row. And studies show there are still racial disparities in every step of the criminal justice system – Black people are disproportionately stopped by police, arrested, and unlikely to make bail.

Virginia's on track to become the nation's 23rd state to abolish the death penalty. But the practice is still legal at the federal level. Now, advocates hope the state's coming change can motivate others to take similar action.

Elijah McClain. Yesterday, independent investigators accused Colorado police and paramedics of making several errors that led to McClain's death. In 2019, the 23-year-old Black man died after police put him in a chokehold and paramedics injected him with ketamine. Yesterday, independent investigators released a 157-page report that found that Aurora police had no justification to stop, frisk, or choke McClain. And that paramedics didn't do their due diligence in assessing McClain before sedating him. On top of that, the report argues that Aurora PD "failed to meaningfully investigate" the officers involved. The Aurora Police Dept has not commented on the findings. McClain's mother said she was relieved that her son's name was cleared from being a suspect.

Which company still has safety concerns...

Boeing. After an engine on a Boeing 777 plane caught fire and fell apart mid-air over the weekend, the company is trying to play it safe – recommending dozens of its 777 jets be grounded. Boeing urged airlines not to fly aircrafts powered by the Pratt & Whitney engine model involved in the incident. So United Airlines (the only US co to use the specific engine) grounded all 24 of its Boeing 777 planes. And the FAA and NTSB are investigating the engine failure.

Former President Trump's tax returns. Yesterday, the Supreme Court rejected Trump's last-minute efforts to keep his tax returns private. It was the latest ruling in the drawn-out legal saga for Trump, whose defense team has fought to keep his financial records sealed. And marks a victory for the Manhattan DA's office, which has tried to get a hold of Trump's tax deets as part of an investigation into alleged hush-money payments to two women. Trump condemned the decision, calling it a politically motivated "fishing expedition." Now, the DA's office is expected to get a peek at those records within days.

...Oh and speaking of the Supremes, they denied an appeal from Pennsylvania Republicans to disqualify thousands of last year's mail-in ballots.

Who Americans are mourning...

Their families. Yesterday marked 500,000 people in the US dead from COVID-19. President Biden held a moment of silence for the lives lost – more than the number of Americans who died in battle during World War I, World War II, and the Vietnam War combined.

At least we have Obama and Bruce.