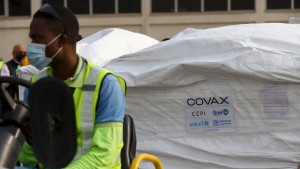 Ghana just became the first country to get access to COVAX.

Last year, the World Health Organization helped launch COVAX – an initiative that's aiming to bring over 2 billion coronavirus doses of vaccines to poorer, developing nations by the end of this year. And to discourage rich countries from hoarding shots once developed. Over 190 countries told the WHO 'sign me up.' Now, after suffering some hurdles, COVAX has delivered. Yesterday, 600,000 doses of the AstraZeneca vaccine arrived in Ghana – launching the largest vaccine initiative there.

The western African nation got first dibs after it proved it could carry out quick immunizations. The country, which has seen over 80,000 COVID-19 cases and more than 580 deaths, is set to begin vaccinations next week with frontline workers up first. The WHO called the vaccines' arrival a "momentous occasion." But the shipment is enough for only about 1% of the country's population of 30 million. The need for more has some health experts concerned – especially since Ghana and other African countries are dealing with more infectious coronavirus variants. And developing countries are still far behind on vaccinations, so COVAX has a lot of work to do to catch up.

Wealthy countries like the US and the UK started their vaccination efforts months ago. And other countries (like Israel) have already started to reopen their economy after a massive vaccination campaign. Stateside, over 65 million vaccine doses have been administered (nearly 14% of the population). The Biden admin, who helped the US rejoin the WHO recently, pledged $4 billion to help with global vaccine distribution. But the US hasn't gone as far as donating doses since it's focused on what's happened at home. Speaking of…

Give me the update.

Yesterday, the FDA said the Johnson & Johnson vaccine appears to offer strong protection against COVID-19. The single-dose vaccine has shown to be over 66% effective against moderate to severe coronavirus infections. But it's not clear how effective it is against variants. It also doesn't have to be kept in very cold temperatures, which could make distribution easier. The agency's meeting to discuss J&J's emergency use authorization tomorrow. And if everything goes well, 3 to 4 million doses could be on track for delivery next week – making a third vaccine available in the US.

The vaccine race has largely been among wealthier countries. But now a developing nation has entered the chat, offering hope to the dozens of other countries who are still waiting to get their shot.

What's not going according to the new admin's plan...

Immigration. Earlier this week, a federal judge banned the Biden admin from pausing most deportations, indefinitely. Days into his admin, President Biden put a freeze on deportations for 100 days. Soon after, Texas AG Ken Paxton (R) filed a lawsuit against the gov, saying the freeze violated an agreement between the state and the federal gov. A federal judge in Texas agreed, blocking the freeze for two weeks and later extending it. Hundreds of migrants were deported. Now, the same judge is saying 'let's make this last longer.' It's a win for Paxton and a loss for the Biden admin – which is focused on overturning tough Trump-era immigration policies. An ACLU official said the ruling will "seriously harm families and communities around the country." It's unclear if the Biden admin will appeal, but the White House said the president is committed to "immediate action" to change the immigration system.

Illinois. Earlier this week, it became the first state in the country to eliminate cash bail. The practice – which allows people to pay money to leave prison until their trial – has long been criticized as a "poor people's tax." Think: those who don't have the means to pay are forced to stay incarcerated. In some cases, for years. In others, for crimes they were wrongly accused of doing. And it disproportionately impacts people of color. Now, Illinois lawmakers are saying 'this has to end' and included the bill in a package of criminal justice measures. State Rep. Justin Slaughter (D) said it showed action from racial justice "protest to progress." But law enforcement groups said the legislation is "anti-police" and punishes officers.

Heteronormativity. A new poll showed that one in six Gen Z adults (born between 1997 and 2002) identify as LGBTQ+, with the majority identifying as bisexual. It comes as the number of people identifying as LGBTQ+ has increased with every generation.

Who's delivering some great news...